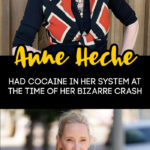 Anne Heche is currently fighting for her life after driving her car into a home in Los Angeles.

The bizarre episode took place over 30 minutes. She actually crashed the car 2 times BEFORE plunging headfirst into the Los Angeles home.

The final incident caused her car to ignite into flames, and according to Entertainment Tonight, it took nearly 60 firefighters to pull her out of the inferno.

Everyone has wondered what the heck happened. How in the world do you crash your car, first into an apartment complex, and finally into a house?

Well, we might finally have some answers, and it’s not looking good for Anne, who is currently on a ventilator and in a coma with, what the Los Angeles Times referred to, as “a severe anoxic brain injury.”

After an initial blood test, Anne was found to have narcotics in her system.

Now, this blood test could be deemed invalid, because medications that the hospital gave her could have resulted in the positive test results.

Anne Heche is now being investigated for Felony Traffic DUI. — Right now, what has been found is a presence of narcotics in her system, however additional testing is required because we have to rule out additional substances administered at the hospital.

An LAPD spokesperson to ET

A second blood test was done, but those findings won’t be available for at least 30 days. That test, however, will be a little more conclusive.

An officer also told the Los Angeles Times that Anne had cocaine in her system at the time of the crash.

As of right now, Anne is still in a coma, and has been since right after the incident.

We will have to see how this plays out, but no matter what happens, it’s not a great situation for Ms. Heche.

Our thoughts are with her and everyone involved in this very strange incident.