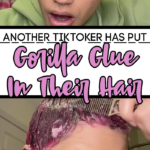 Just when we thought the Gorilla Glue saga was over, there is an entire chapter left unread.

After the traumatizing experience Tessica Brown endured when she sprayed Gorilla Glue in hair, which was then followed by Len Martin, the guy who decided to gorilla glue a cup to his mouth, we now have part 3 featuring Avani Reyes.

I have to admit, I am quite shocked and just baffled that someone else would try this…

The fiasco that left the world in shock regarding Tessica Brown, another TikToker has followed in pursuit and no, this is not a joke.

A video that has gone viral on TikTok shows Avani Reyes trying to comb through her hair with little to no hope because as you can guess, Gorilla Glue is stuck in her hair.

After she clearly had no success combing her hair, videos follow Avani taking a trip to the hospital to try and remove the damage done.

According to Avani, the hospital staff was unsure on how to remove the glue and suggested tea tree and coconut oil.

Of course the TikToker tried washing the glue out of her hair after her visit to the emergency room but as we all know, THAT. DOESN’T. WORK even if you use coconut oil!

Now Avani is contemplating on starting a GoFundMe page, asking people to help pay for the surgery she might schedule to remove all the glue.

Apparently, the GoFundMe page has received enough donations so Avani can fly out to LA and proceed with surgery as she quotes in her latest TikTok video.

As of right now, it looks like Avani still has plenty of glue left to remove in her most recent TikTok video.

Hopefully this is the last chapter in the Gorilla Glue trilogy and if you were left puzzled as to why someone else would attempt to put Gorilla Glue in their hair or anywhere near their body, you aren’t the only one.

People, please refrain from using Gorilla Glue IN YOUR HAIR!

39.7K shares
Starbucks Is Giving Free Cups To Rewards Members. Here's How To Check If You Got One!
← Previous
The Lady That Put Gorilla Glue In Her Hair Has A New Hairstyle
Next →
Click here to cancel reply.

Did the same stupid crap, then got it out with oil, and kept all of the donations that people gave to help this moron fix it with surgery. Didn't need the surgery, and has a bunch of money that he took from even dumber people that opened their hearts and wallets to him. Great guy...🙄🤡

The stupidity of it all I understand.. these people are starved for attention.. they want to be tik tok famous and they get that by doing these outlandish things 🤦🏼‍♀️ but who are these people that are giving this kid 3000$ on a go fund me 🤦🏼‍♀️ there are people on go fund me that have lost everything to a fire, or people who are trying to pay for 3 family members funerals after a horrible car accident.. but this tool shed puts gorilla glue in there hair like the moron they are and the hand outs just free flow. 🤦🏼‍♀️ this world is weird.

This is actually the 4th incident another young lady used Gorilla Glue tape to wax her private parts. SMDH!!!!!

@Fanny Doucette, they are

@Lalani, For real? Stupid people man. Now she ripped the skin off her coochie. 😂

@Lalani, Omg lol are u serious i cant even stop laughing what she gonna do go show everyone on tiktok her meow lol ppl these days make themselves look absolutely ridiculous af😂😂😂