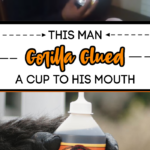 Earlier this week, we told you about the genius lady who used Gorilla Glue on her head when she ran out of her hair product.

NOW, I get to tell you all about Len Martin. He is a guy who just wanted to create a viral Facebook challenge — as people do.

He says that he wanted to prove that Tessica Brown, the chick who used the Gorilla Glue in her hair, was overreacting and blowing the whole glue situation out of proportion.

In a stunt that he is now regretting, he took to Facebook to make a video where he thought he would line a solo cup with Gorilla Glue, and then lick it right off — Badda Bing, Badda Boom.

As you can imagine, it didn’t exactly work out as planned.

He sure did line that solo cup with Gorilla Glue — but then he stuck the D*** cup to his mouth.

Like, he pretty much permanently sealed the cup to his face.

Off to the ER he had to go.

Martin described what the doctor did as “painful peeling.”

Not only did the doctor in the ER have to peel that cup off bit by bit, it apparently left his lip in a bad state.

The doctor informed Mr. Martin that if the tip of his lip did not heal correctly, he would have to have it taken off by surgery.

Martin says, “This is not the challenge you want to try.”

Our spray adhesive states in the warning label, “do not swallow, Do not get in eyes, on skin or on clothing…” It is used for craft, home, auto or office projects to mount things to surfaces such as paper, cardboard, wood, laminate and fabric.

PLEASE, do not try this, or any other stupid challenges, at home — or anywhere else, for that matter!

32.3K shares
The Woman That Sprayed Her Hair With Gorilla Glue Is Finally Unstuck After Getting Surgery
← Previous
I Can't Believe I Have To Say This, But People Stop Using Gorilla Glue On Your Body!
Next →
Click here to cancel reply.

I am just at a loss for words with these gorilla glue incidents. I meant cmon it reads in red letters not to get it on your skin . It’s one of the strongest glues on the open market. I don’t even know why I staying these common sensible statements. Like the article reads PLEASE STOP PUTTING GORILLA GLUE ON YOURSELF

Rofl Like how stupid dou have to be. Well at least human stupidity is amusing. It may be kinda mean to laugh at these morons . But sorry not apologizing for laughing at morons

People are so stupid so they can sue a company..