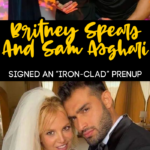 As most of you know, Britney is making the most of her freedom from her conservatorship and tied the knot with her longtime boyfriend Sam Asghari.

I’m so happy that she can now live her life and she has a lot of living to catch up on.

I don’t blame her, it’s probably hard to trust anyone completely after all that she has been through, even those that she loves.

Sam Asghari and Britney Spears signed a prenup that ensures that he will not receive any of her multi-million dollar estate that was earned before the marriage, just in case it doesn’t work out.

After they announced their engagement last September, Sam joked on Instagram that he needed to set up a prenup to protect himself, even though he isn’t at a Britney level of wealth.

Thank you everyone who is concerned about The prenup! Of course we’re getting an iron clad prenup to protect my jeep and shoe collection incase she dumps me one day.

Sources close to Britney and Sam informed TMZ that a prenup was arranged before the wedding.

Britney Spears is worth about $60 million, so yea… I think that was a smart move on her part, you know… just in case.