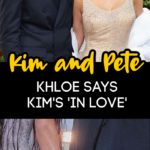 You didn’t think we could go a day without a Kim K update, did you?

Kim and Pete Davidson are getting cuter than ever, and it would appear that they are even getting a bit more serious.

I mean, people are throwing around the “L” word when it comes to the relationship we are all dying to know more about.

Check it out. Kim K is getting even more publicly serious about Pete. They are making official appearances on the red carpet together, doing photoshoots as a couple, and getting matchy matchy with their hair color.

Remember last week when everyone was talking about Kim Kardashian Changing Her Voice To Sound More Like Pete Davidson?

The pair are so cute, my teeth hurt. Ha!

Now, we don’t know if the couple have actually dropped the word “love” into their everyday conversations. But, in a recent episode of The Kardashians, the show’s producers straight up asked her about her feelings.

I don’t know if that’s any of your business.

Fans immediately picked up on the signals Kim was oozing from her very being.

One fan — who appears to know the family and the show — even took to Twitter and commented on the Kim K situation.

Kimberly is in LOVE lmao it’s so cute.

Kim’s sister, Khloe, was quick with a comeback, and she is totally corroborating the sweetness.

Isn’t it??? She is in LOOOOOVVVEEEE

They are so cute, aren’t they?

Pete even told Kim that she would be obsessed with him one day — and I think maybe he was right.

Pete and I have been dating for a few months. We’re doing really, really good — Pete said ‘I’m gonna grow on you. Just wait.’ He knew. He said ‘I give it four months in and you’re gonna be obsessed.’ I was like, okay, we’ll see.

I can’t wait to see what comes next on the Kim and Pete relationship front.

Maybe soon we will have ANOTHER Kardashian wedding to obsess over. YAY!! I can’t wait!!