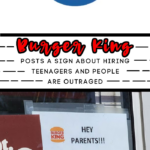 A Burger King in Ohio posted a sign at their drive thru saying they will hire 14 and 15 year olds, and people on social media are apparently outraged.

There is an obvious shortage of fast food workers across the country.

Restaurants near where I live have even posted signs that they are only using the drive thru, or they are completely closed on certain days, because they simply don’t have the workforce to cover the demands of the restaurant.

Not to mention the LINES at all of these fast food joints — it has gotten ridiculous!

Many restaurants are DESPERATE to hire employees, putting up signs in front of their stores and even posting on facebook, begging people to come work for them.

In Ohio, teenagers are allowed to work as young as 14.

Don’t worry — labor laws in the state of Ohio are still taking care of them, limiting the amount of hours and the types of jobs that they can work.

Burger King was simply letting people know that, if their kids WANTED employment, they would be happy to hire them on for part time work.

People, though have lost their minds, and can’t believe Burger King would do such a thing.

I, personally, don’t see what all the freaking out on social media is about.

It’s not like Burger King is demanding child labor.

They are simply making people aware of the fact that they are allowed to hire at 14 years old.

I even wrote to the state of Texas, and got a work permit.

Six Flags Over Texas hired me right up at 15, and nobody thought anything about it — I wanted a job, and my parents agreed I could get one, so I did.

I had, what you call, a work ethic — maybe you have heard of it — people in the olden days were expected to have one when they went into their jobs.

In Ohio, once a teenager reaches 16 and 17 year olds, they can work at an even broader range of jobs than the 14 and 15 year olds can work.

The requirement is that, at such a young age, they aren’t allowed to do what is “explicitly deemed to be too hazardous.”

So, if a kid WANTS to work, and the parents say it’s okay, they are ALLOWED to work — maybe people don’t agree with it, but it’s the law.

They aren’t being REQUIRED to work — but they are ALLOWED to work.

Ohio even goes as far as requiring that the kid be in school!

While the kids are in school, 14 and 15 year olds can’t work more than 3 hours during the school week.

The maximum work hours they can work on the weekends is capped at 8 hours.

Also, the total number of hours they can work per week is 18 hours.

The law also has specific requirements for breaks — they HAVE to get a 30 minute break after working 5 hours.

Don’t worry — Ohio has the best interest of the teenagers at heart!!

So, Burger King isn’t trying to harm the teenagers — they are simply OFFERING them the chance to come and work at their restaurant.

I would have TOTALLY jumped at that when I was a kid.

These kids are going to be paid the going rate for minimum wage — which is $8.70 an hour.

These young kids are going to make BANK at an early age!!

Just imagine — they can start saving up for a car, they can put money back toward college, they can go shopping and spend their OWN money on things!!

What do you think? Is this exploiting children? Is this a bad practice? Is it good for those teens that WANT to work?

Well since $3.85 in 1990 money is now worth $7.87, I wouldn’t exactly describe minimum wage as “making bank” for a person of any age. Accounting for inflation it’s less than a dollar more per hour than people with such a great work ethic made when they were kids. Don’t patronize people by comparing wages from 30 years ago like they’re getting some kind of deal.

To each their own. If they want to and it's cool with their parents,go for it. They'd be out doing something good instead of getting into trouble and earning responsibility early in life!

I think people are ridiculous! Most states allow kids to work at 14 some even 13. It all depends on the job and it's definitely NOT child labor. They are protected by the laws. I went to work at 14 for sonic. It was legal and I made $1.80/hr!that was by far not the minimum wage but they got around that by saying we "could" get tips. Back then they didn't have to prove it. Just say it. I think in the entire year I worked there I might have gotten $10 in tips. Lol Before I worked at sonic I always had some kind of job from age 7 on. I sold things door to door. I worked in the school cafeteria from 1st our 2nd grade. I baby-sat. And other such jobs. Sure never, ever was bored. Lol

I started working at 8 years old on my family's farm. I was cutting wood for our wood burner, helping with animals, bailing hay. You name it. When I turned 15 I got my own job at a pizza place. Theres nothing wrong with this at all.

I don’t think there’s a problem we all used to work when we were that age; grocery stores, restaurants, babysitting,etc. it gives a child a sense of responsibility and they would appreciate things more when buy it for them self.