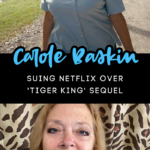 Ah — Tiger King. It’s the gift that just kept on giving, and made sure we all stayed glued to the edge of our seat during the beginning of the pandemic.

There is more Tiger King drama, and it involves that villainous character that we all love to hate — Carole Baskin.

By now, you’ve surely heard that Netflix is working on a Tiger King sequel. Well, it turns out that Carole Baskin is having none of it.

Apparently she doesn’t think she fared too well in the popularity department from the release of the OG Tiger King docuseries.

I mean, how do you really make (allegedly) feeding your husband to a tiger, riding a bike around your tiger sanctuary like a loon in your tiger-themed garb, and (also allegedly) exploiting your volunteers and big cats on the daily look — well — sane?

They have “filed an emergency motion Monday for a temporary restraining order that would bar them ‘from any use of film footage of the Baskins and the Big Cat Rescue sanctuary in Tiger King 2 or in any related promotion or advertising.'”

Don’t we all deserve a second season of Tiger King?!?

The second season of Tiger King is set to drop on Netflix on November 17th, and the Baskins don’t want their name associated with anything that’s going to paint them in a harsh light.

Well, apparently the Baskins weren’t fans of the trailer, because they quickly went to pick up the proverbial Ban Hammer to try stopping the release of Tiger King season 2.

Per the complaint, the promo “prominently depicts the Baskins as a central element of the sequel through the use of the film footage acquired by Royal Goode Productions.” The Baskins assert that the footage breached the appearance release they signed for the show’s first season.

They claim that any footage of them or Big Cat Rescue was to be used for a documentary motion picture, but they said they didn’t approve use of their footage for a Tiger King sequel series.

No mention is made of granting Royal Goode Production sequel rights, rights to create derivative works from ‘the Picture’ or additional seasons or episodes… By utilizing the film footage of the Baskins and Big Cat Rescue secured by Royal Goode Productions under the Appearance Releases in ‘sizzle reels’ and promotional trailers for the sequel entitled Tiger King 2, the Defendants are in breach of the terms of the Appearance Releases.”

They want any and all footage of themselves and Big Cat Rescue removed from the Tiger King sequel. To take it even further, they want a “trial by jury for the matter.”

Now, obviously this would affect the release date of the Tiger King season 2. Boo! Hiss!

Carole is also complaining that the OG Tiger King had a negative impact on her and her sanctuary. She says that the docuseries “wrongly attempted to suggest that Big Cat Rescue abused its animals by keeping them in very small cages while not making clear that the animals actually reside in expansive enclosures.”

She didn’t do it!! (allegedly)

As a side note, Carole also doesn’t like that the world now thinks she had something to do with the disappearance of her first husband.

I, for one, think the footage should remain intact, and season 2 of Tiger King should drop as planned!! I could use a mindless Netflix binge that makes me feel oh-so-much better about my life. LOL!!