As many of you know… I sometimes get to drive cars and check them out. This is fun for me because my car is like a bajillion years old and when I get to drive new cars they do all sorts of fancy things like talk to me (um, seriously, the Kia Optima greets me like I am a princess every time I start it up) tell me where to go, and even make it so I can talk on my cell phone all handsfree and such. 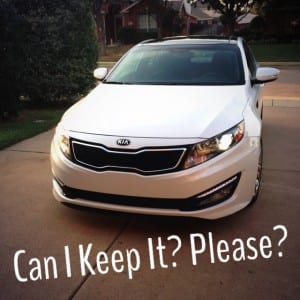 But the Kia Optima. The Kia Optima is different. It’s special. It’s maybe the fanciest car I’ve ever driven.

Let me just pause and let that sink in with you for a second… the Kia Optima is a KIA– and it’s the fanciest car I’ve ever driven. We’re talking movie star status. I went to pick up my food in it and the guy that brought it out to my car liked it so much he went back in and got his friend to check it out. I totally don’t blame them. It’s adorbs. 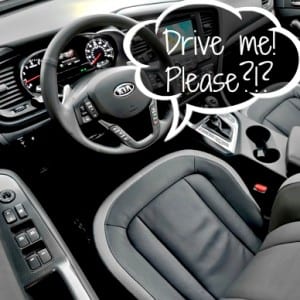 Sometimes when I drive cars for the week, I get bored and go back to my car… not this time. This time I drove that thing until the very last second they came to pick it up. Like… seriously, I bet the engine was still warm when they took it away.

I think my favorite feature of all though… was something that’s so simple. I don’t know why all cars don’t have it. Maybe it’s because all cars aren’t as smart as the Kia Optima! But, right in the door, there’s a bottle holder. That’s right… not a cup holder– a bottle holder. I can’t tell you how many times I’ve had a bottle of water that wouldn’t fit into my center console. I wanted to take it with me, but it had nowhere to sit. If I had a Kia Optima, I would never ever have that problem again! Think about those Smart waters– the way they’re all giant and they won’t stay in the cup holders. Ugh! It’s so frustrating! 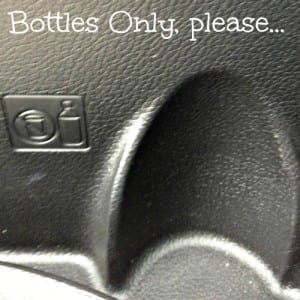 My daughter says she likes the Kia Optima because it smiles at you. I think she’s right. Would I own this car? Heck yeah I would. The Kia Optima is one of my favorite cars of all time.

Hello Jamie, I am new to your blog! I love your style and way of writing. I found out of your blog through Living Locurta, have been following it since a while! Keep up the great work!

Have a great day!

This is our best-selling car right now and I freaking love it. Honestly, it's the best-looking car on the road, it's classy and powerful, and just feels good to drive. Love it and love your review!