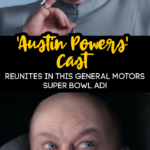 It’s been a minute since I’ve watched Austin Powers, but after watching this GM Super Bowl commercial I have to rewatch it again!

Dr. Evil is the star in this General Motors Super Bowl ad with the main cast from the movie franchise.

In the commercial General Motors wants people to switch over to electric vehicles and Dr. Evil plans a takeover of General Motors so that he can rule!

We are using climate change as the enemy. A large majority of first movers and the younger population, this is very much in line with their purpose and their vision, and they are very concerned about climate change overall.”

One of my favorites, Seth Green, is also featured in the General Motors Super Bowl commercial and he’s a daddy, awwww!

It really does feel like the band that has been playing together for 30 years. ‘Austin Powers’ is still one of the most globally recognized things I’ve done. There is a fan base for it.

The only thing I know is that Mike took a very first-hand, personal interest in shaping the script so that it not only accurately represented the characters in the narrative, but also sold the product in way that the company was happy with.

I don’t know about you, but I think it’s time for the return of Dr. Evil to the big screen with a new movie! What about you?