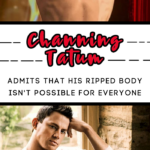 Channing Tatum admits that he KNOWS his HOT bod is not something the average person can achieve.

He also admits that his body is an unrealistic standard for MOST people.

It takes lots and lots of money, personal trainers, personal chefs, nutritionists, and a lifestyle that is capable of taking the HOURS that it takes to get in peak perfection.

We ALL know — or at least we SHOULD know — that Hollywood and the media paints a very unrealistic view of body shape and health.

In a recent interview with Kelly Clarkson, Channing admitted that he knows this is the case.

He spent some time talking about his AMAZING body, and said that KNOWS it takes a lot of time and money, and that it isn’t quite possible for the average person.

As someone that has to workout for a job, I promise you I would not look like this unless I had to be naked in most of my movies — and like at some point I have to get better at acting, so I don’t have to get naked in all of them.

“I literally get to work out as a job and it’s still hard,” he said. “I can’t imagine people who have a 9-5 job, who have kids at home, and where do they get the energy and the time to actually focus on themselves?”

Let me tell you, I’m going through a lifestyle change (AKA a new diet), and that ALONE is hard.

Add in the hours and hours that it takes to work out, and it just isn’t possible for someone that doesn’t get PAID to do so.

Thank goodness that this is something that actors are now openly admitting.

We have always KNOWN that it took more work — and MONEY — than most of us can dish out to look like Channing.

But, it is so refreshing that famous people are now openly saying that they know it’s unrealistic for the normal person.

Another celebrity who admits that working out and body transformation is more work than the normal person can fit into life is Kumail Nanjiani.

Kumail said in a recent interview, “I would not have been able to do this if I didn’t have a full year with the best trainers and nutritionists paid for by the biggest studio in the world.”

I’m glad I look like this, but I also understand why I never did before. It would have been impossible without these resources and time.

So, if you are struggling and wondering WHY you can’t look like one of these larger-than-life celebrities, just know that THEY wouldn’t look like this on their own.

There isn’t a NORMAL amount of exercise and diet that can pull off the shape these people are in.

You are normal. You are fine. You are doing the best you can, and that’s fantastic!!

2 shares
This Succulent Will Remind You Of Tiny Strawberries Growing On A Vine
← Previous
The Trailer For Netflix's New Post-Apocalyptic Movie Made Me Feel Anxious
Next →
Click here to cancel reply.