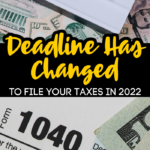 We all know that April 15th is the deadline to get our taxes done and turned into the Internal Revenue Service, however, this is 2022 and things are a bit different.

See, April 16th is Emancipation Day in Washington, D.C. and it commemorates the date when President Lincoln signed the District of Columbia Compensated Emancipation Act back in 1862.

Not a slave exists in the District of Columbia … Their shackles have fallen, never to be restored.

Nothing has changed with those dates, but since April 16th falls on a Saturday, that means it will be celebrated on the closest weekday to that date.

In this case that would be Friday, which is April 15th… meaning federal offices and city offices in D.C. will be closed in observance.

Deadline To File Your Taxes For 2022

So, this year you will have until Monday, April 18th, 2022 to get those taxes done and filed with the IRS to meet the deadline.

However, if you are in Maine or Massachusetts you have until April 19th, 2022 because April 18th is Patriots’ Day!

On April 19, 1775, the Battles of Lexington and Concord kicked off the colonists’ fight for independence from Great Britain.

If you need to file an extension to file a return, you will have until April 18th, 2022.

As of right now, the IRS has not announced when it will start accepting returns for 2021, last year it started (2 weeks later than the previous year) on February 12th, 2021.

I plan to get mine in as quickly as possible this year since last year it took forever to get our refund.