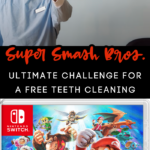 Super Smash Bros. brings out the competitive gaming in all of us.

Dr. Tej A. Shah at Zen Family Dental has created a new way to attract patients with pearly whites, and that’s beating he or she at a game in Super Smash Bros. Ultimate, sort of like, an ice breaker activity.

Apparently he’s so good that this dentist is willing to verse anyone who has the guts to beat him at his own game and in return, will get a free teeth cleaning!

With the competition also comes rules, and Dr. Shah has established some basic rules in the 1v1 match including a showdown featuring three stocks, no items, and no Final Smashes.

In addition, individuals up for the challenge must register to become patients before competing and furthermore, Dr. Shah warned his potential opponents that “If you lose, you need to tell the whole world that you lost to a dentist” and no one wants that!

While his favorite fighter was revealed to be Little Mac, Dr. Shah has also mentioned that he is improving with the DLC fighters Pyra and Mythra as well.

Now the real question is, are you up for the challenge to win a free teeth cleaning and who’s your chosen fighter?

This is a super cool idea!