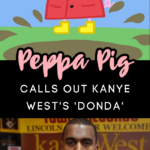 I simply adore Peppa Pig! The little British talking Pig is the real MVP when it comes to children’s programming, IMHO.

Perhaps even more than Peppa, herself, I love the Tweet that her Twitter account sent out that compared her album Peppa’s Adventures: The Album to Kanye’s (Ye’s) FINALLY released Donda album.

Keep reading to see it. LOL!!

The account totally called out the fact that Kanye had so many “listening parties” before the release of Donda.

Peppa had ZERO listening parties before the release of HER album, and still managed to rank 0.5 points higher than Kanye on Pitchfork’s ratings scale. She is totally owning those 0.6 points. LOL!!

Donda was FINALLY released on Sunday (allegedly against Kanye’s wishes), and Pitchfork gave it a 6.0 rating.

Kanye West’s 10th album arrives barely finished and with a lot of baggage. Its 27 tracks include euphoric highs that lack connective tissue, a data dump of songs searching for a higher calling.

But back in July, Peppa Pig released her own album, Peppa’s Adventures: The Album, and Pitchfork blessed it with a 6.5 rating — 0.5 points higher than Donda!

The four-year-old pop phenom and famous pig’s second album is a charming and self-assured celebration of family, friendship, and muddy puddles.

In a since-deleted Tweet, Peppa made the comment, “Peppa didn’t need to host listening parties in Mercedes-Benz Stadium to get that .5.” BURN!! LOL!

I guess perhaps they didn’t want to ruffle the feathers of the mighty Kanye West.

But, it wasn’t deleted before screenshots were taken!! Sometimes the internet is awesome!!

There is no word from Peppa or from Kanye about the incident, but that doesn’t make it any less hilarious!!