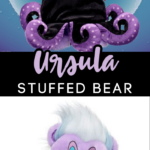 Banished from King Triton’s palace seeking revenge who turned into a villain, an underwater sea witch has surfaced from her sea floor lair into a Disney inspired huggable stuffed bear.

Thanks to Build-a-Bear, Disney’s sea witch Ursula, is now part of the Build-a-Bear stuffed animal’s collection!

The included black and purple tentacle dress that makes the stuffed bear even more realistic to the character in the film, the Sea Witch stuffed bear also has a song she sings.

Dubbed the “Poor Unfortunate Souls” song, her singing tune can be played when you press on her paw.

You can currently find the Disney inspired singing Ursula on Build-a-Bear’s website for $58.