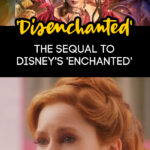 OMG!! It was just announced that Disney’s Enchanted sequel is about to drop on Disney+, and I can’t wait!

Back in 2007, Enchanted burst onto the scene, showing us all what a real-life fairytale might look like, and we were obsessed!

With amazing actors and a soundtrack that kept us coming back for more, Enchanted was a hit with everyone.

NOW, Disenchanted — the sequel to Enchanted — is taking us back to continue the story of Giselle, Prince Edward, Morgan, and Robert.

As you can imagine, life with a new baby isn’t alway the fairytale that you would expect, and Giselle is learning that first hand.

I know that change can be scary, but it can also be exciting.

Not only is there a baby, but they are setting out on an adventure for a new life in a new town.

Perhaps this new life isn’t the fairytale that Giselle wished for, so she is taking matters into her own hands.

“Ten years after her happily ever after, Giselle (Adams), Robert (Dempsey), and Morgan (Gabriella Baldacchino) move to a new house in the suburb of Monroeville. The community is overseen by Malvina Monroe (Rudolph), who has nefarious intentions for the family. When problems arise, Giselle wishes that their lives were the perfect fairy tale. The spell backfires, with Giselle rushing to save her family and her homeland of the kingdom of Andalasia before the clock strikes midnight.”

Disenchanted is going to drop on Disney+ November 24th — Thanksgiving movie, anyone?

You can see the trailer for Disney’s Disenchanted below.