I like to cook. A lot. I also really, really love to eat, so after quitting my full-time gig as a Children’s Librarian a few months back and finding out a week later that I’m pregnant with my first baby, I really started to nest. This includes cooking a lot of meals at home, partly because my husband and I are now down to one income and need to save for the inevitable explosion of baby expenses, and partly because any excuse to eat more food is a legitimate excuse for me.

My mother recently emailed me a recipe for quick-pickled jalapeños. Heck yeah. Gimme! I inherited a love of all things spicy from both parents, but a special love of jalapeños from my mom. I also inherited her willingness to commit self-torture for the sake of that deliciously dangerous spiciness. I replied to her email and said I would definitely give it a try. A few hours later I returned home from the store with what might have been a pile of the most enormous jalapeños I have ever seen. Seriously! Look at these things! I could feast on these bad boys all week! 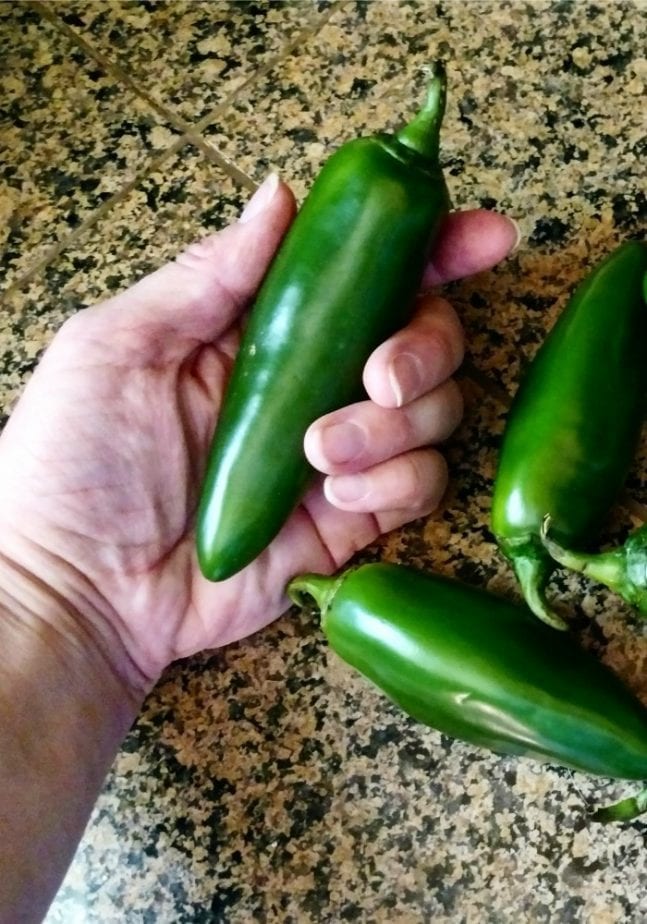 Just to be safe before I began the pickling process, I referenced a few other recipes for any interesting variations and also pulled out my copy of Carol Barrow’s absolutely gorgeous book Mrs. Wheelbarrow’s Practical Pantry: Recipes and Techniques for Year-Round Preserving. She mentions not to breathe in the fumes of so many slices of freshly-cut, boiling peppers. Easy. I can not breathe for a few minutes.

Okay. It’s obvious that I did not remember this sage advice, but I only coughed a little bit off and on for maybe 40 minutes. It was annoying, but bearable. Lesson learned.

The one piece of advice that I didn’t heed – the advice I read on every single cooking blog that I visited just minutes before beginning the whole process – is to wear gloves while cutting and handling hot peppers.

Whatevah! I do what I want! I’m a lifelong jalapeño eater and have cut hot peppers with naked hands my entire adult life. I could handle this, you guys. Honest. I’m tough. I broke a toe once. I went a week without pooping during my first trimester of pregnancy. I survived the travesty that was the 2005 version of Fantastic Four. I can totally handle hot peppers with my bare hands.

This was wrong. And a little stupid.

Slicing the jalapeños was not the stupid part. No, the stupid part was when the mixture of water, vinegars, garlic, and spices came to a boil and I scooped the enormous pile of freshly sliced jalapeños confetti-ed with their own seeds and dripping in eye-watering juices from the cutting board to the mixture in the pot. It didn’t hit me right away. I immediately washed my hands twice after handling the peppers. I then proceeded to stir them around a bit with a spoon to make sure they changed color like one recipe said they would. It was while I used a pair of tongs to transfer the jalapeños from the pot to a jar that I felt the first hints of warmth building in my hands. I completed the transfer, then washed my hands a couple more times for good measure. This only seemed to make it worse.

A few thoughts zipped through my brain: What the heck? Why are my hands starting to burn? Is it because I don’t properly moisturize? I bet it’s because I don’t remember lotion. But I washed my hands four or five times already. Maybe it’s a pregnancy thing– Oh no…

I realized my mistake. My easily preventable, careless, and somewhat stupid mistake. My hands were burning from the peppers!! My precious, beautiful peppers had betrayed me! What was I supposed to do? A quick search online suggested soaking hands in milk or yogurt. Of course! The two things I don’t keep in the house because I’m allergic to dairy. Oh! Olive oil! I could do that! I had forgotten to pick some up at the store, but I still had a few tablespoons let. I smeared about a tablespoon of olive oil onto my hands and felt some slight relief within moments. Oh, yes. Yeesss. I could sit here the rest of the evening and let this wonderful oil soak into my hands.

But, wait. I suddenly had to poop. I mean, I really had to drop a load, you know what I mean? I thought I might actually release the Kraken with this one. My god, man. What do I do? The olive oil felt so good against the burn, but after that first trimester of perpetual constipation I couldn’t afford to not poop. I had to go. The pooping was worth more to me than the brief respite from the sting of stupidity on my greasy hands.

I washed my hands quickly with soap and cold water, ran to the bathroom, and proceeded to poop a really decent, satisfying poop. I figured baby was happy with the room I had just made…which made me wonder about wiping. Was wiping safe? No matter that I had probably washed my hands with soap six times at that point. Were there traces of capsaicin (the chemical irritant in hot peppers) on my hands? What if I got some on my butt while wiping? Worse yet, what if I somehow got some on my vagina? Or in my vagina? The baby can’t handle that! (This is me ignoring the fact that there are layers of protection between my hands and my baby inside the amniotic sac.) For a brief second, maybe two, I debated calling my husband to come home and wipe my butt for me. But, no. That was ridiculous. I would just wait on the toilet. My phone was in my pocket. I could survive with Pinterest and Facebook until he got home in another two hours.

I’m kidding about that latter part. I would not have waited for him to come home. I totally would have called him.

I managed to have my poop.

I used a LOT of toilet paper and did not burn my nether regions with hot pepper juice.

I applied more olive oil and after roughly two and a half hours of time, the burning on my hands gave way to the familiar dryness of a chronic hand washer.

The peppers cooled in the jar on the counter and are currently in the refrigerator, waiting to be devoured.

I leave you, my good people, with this warning: Don’t be a hero. Don’t let your love of the spicy blind you to reality. Just put on a pair of freaking gloves before slicing hot peppers.

I absolutely LOVE the way you write Amy! You paint such vivid pictures with your words. And you are so stinkin' funny ...tee hee-hee. I look forward to more! Thanks for making me think AND smile. :)

As the mother referenced in the story I would like for all to know that I WILL wear gloves when I start pickling all of the yummy jalapeños from my garden! As always I now know waaaayyyy too much about my daughter's toilet habits.