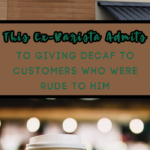 A former Starbucks barista has caused a bit of an uproar on social media after he admitted to giving customers decaf coffees when customers were rude or when he simply felt like doing so.

@dolltin’s video went viral which was then later removed by TikTok, left a lot of commenters angry which was posted in response to another barista’s video also admitting to serving decaf to rude customers who ordered caffeinated beverages.

The former employee stated in his video,

“It’s 100% true. I worked at Starbucks for two years, and I decaffed so many rude people … I would decaf people just if I felt like it.” He then went on to say that he would “decaf” customers who pronounced “croissant” with a French accent.

Although many were mad, several other users jumped to the former barista’s defense.

Later dolltin posted a handful of follow up videos explaining he was only kidding after noticing many TikTok users were frustrated from the initial video that went viral.