I have struggled with whether or not I even wanted to write this. At first, I wasn’t sure if I could speak about what happened here, the dark cloud hanging over all of us. How scary it is, and how much we’re fighting to not let that fear have power over us. I haven’t written about it until now because I don’t want to make this about me, or my pain- because this is so much more than that.  It’s about the hole that has been torn in the fabric of our American soul, and how here, in Orlando, we’re helping each other heal.

In the early hours of Sunday morning, my boyfriend said my name. I usually hide under my pillow and make noises of complaint, but something in his tone snapped me out of sleep and I turned to look at him.

He tells me that there was a shooting at Pulse. Twenty people have been shot. 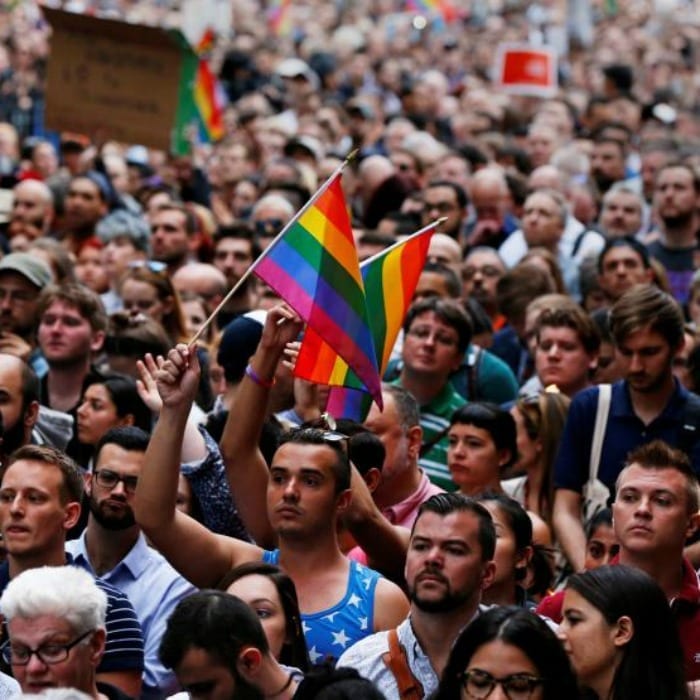 Never in my life did I ever think I would be frantically texting my friends to see if they’re okay. I don’t think time has ever moved so slowly. Pulse. Where we used to go on the weekends. The first club I had ever been to. Where the bartenders have the most winning smiles.

We sat on the couch watching a mother cry for her missing son. Knowing in our hearts but not wanting to admit out loud that her son is never coming home. We sat there while the local news anchors fought back tears. We were squeezing each others hands when they said it was 50 people dead and not 20 people shot. The only word I can think of to describe the feeling is complete and utter anguish. People on the TV keep saying “Florida Night Club” and for some reason this bothers me so much. It makes it sound so sterile. Like they’re not even talking about the same place I’m thinking of, even though I see it on the news right in front of me. To me, to us, it’s just Pulse.

How is the sun still shining?

The aerial view of the club is maddening. I’m staring at it, imagining the layout. Where the bars are. Where I remember the exits being. How small it is inside. What it must have been like. How many phones are in there on the floor- just ringing for someone who will never pick up. My heart broke in a way I never imagined it could. The news anchors say there is a desperate need to give blood. So I get up to go find the nearest place.

When we got there, the wait was 8 hours. People were handing out water and food from the back of their cars. We drove home, and I made an appointment for one week out, knowing that the stores of blood would probably be depleted by then. Within 20 minutes, the news is reporting that blood banks are now turning people away. That’s how many people turned up. It was before President Obama had even made a statement. Less than 12 hours after the attack began.

Let me tell you, I have not always been so thrilled to live where I live. Seeing the rebel flag here is normal, and I’ve always been bothered by that. I’ve always felt like the south is generally less tolerant of different lifestyles and races than other places in America. I was wrong.

I have never been so proud to live where I live than when we drove past that donation line. The looks on people’s faces; distraught, but determined to help. In the heat holding their umbrellas, their children, and each other. I wish I could have taken a photo of their faces. It will be tattooed in my mind for as long as I live. It stole my breath. 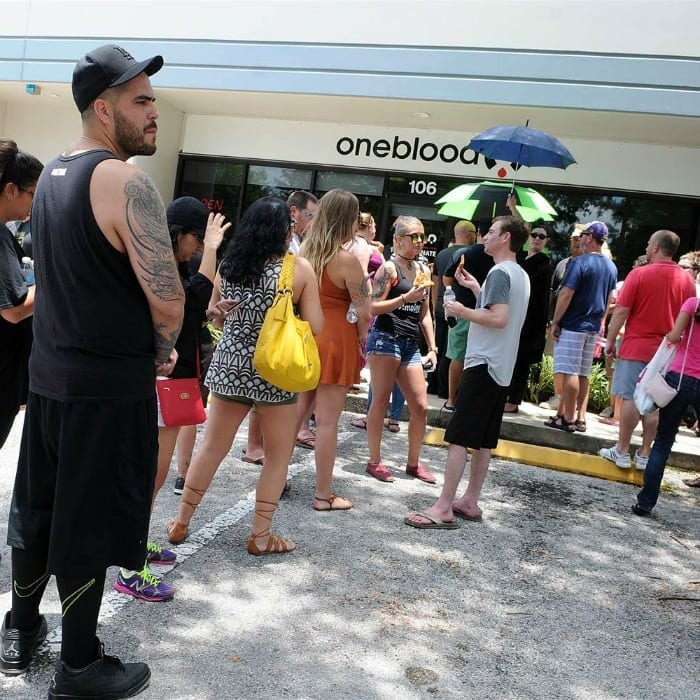 It is the same all over Orlando. Everywhere there are affirmations and messages of hope. From other popular clubs, to theaters and art centers, churches, grocery stores. Everywhere you look- there is a hand reaching out. Every public place has thousands of candles burning in remembrance. Even though the air here is raw, even though there’s white noise hanging over the city long after the helicopters have stopped circling, even though our heart has been ripped out- we’re crying out in love for each other.

Things are different here now, because this didn’t happen in our backyard- it happened in our living room.

Orlando- I am so proud of you. I am so lucky to live in a world that has people like you in it. I’m so humbled by it. I’ll never ever forget that there are thousands and thousands of incredible people like you for every one lunatic with hate in his heart. Thank you for showing me that in the face of devastation- we can be strong and keep loving.

Wherever you are in the world- please give blood. Please don’t forget. It might not help the Orlando victims directly, but you never know what tomorrow brings. You could help a trauma victim, or a newborn baby- it doesn’t take very much of your time. 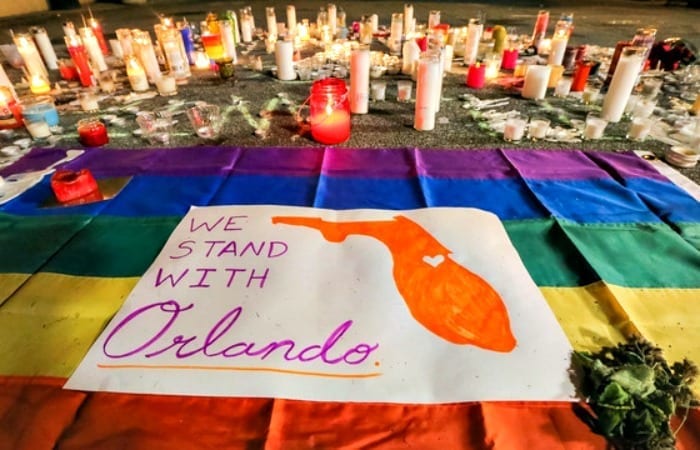 I don’t live in Orlando, and I’ve struggled – along with so many others – to come to terms with the pain and anger, frustration, and desolation I’ve felt following this tragedy. I’m not going to talk about any of that right now, though. I wanted to share a small story I heard on the NPR show AROUND THE NATION yesterday afternoon. In the wake of the shooting, so many people have stepped up to love one another and take care of their neighbors in ways that are truly remarkable and unbelievably generous. The one that stood out to me the most was hearing about how two younger women – Laura Hooks and Jackie Kendall – stepped up to show their neighbors love. You can read the entire story (or listen to the audio) by clicking on the link above, but here’s the part that brought me to tears, in my car, and left me full of hope for a city that has otherwise faced such devastation. Ari Shapiro is the reporter:

SHAPIRO: Yeah, two young women pushing a stroller, going from car to car – I walked up to them and asked them to introduce themselves.

SHAPIRO: So you’ve got a tote bag full of carnations, and you’re putting one under each windshield wiper with a little card that says, we love you.

HOOKS: Yep. We just live around the block and realized that these were cars of victims’ families coming to hear news about their loved one they may have lost today. So we were just feeling for them and wanted to put a little token on their car to let them know that they’re loved and aren’t alone and Orlando grieves with them. 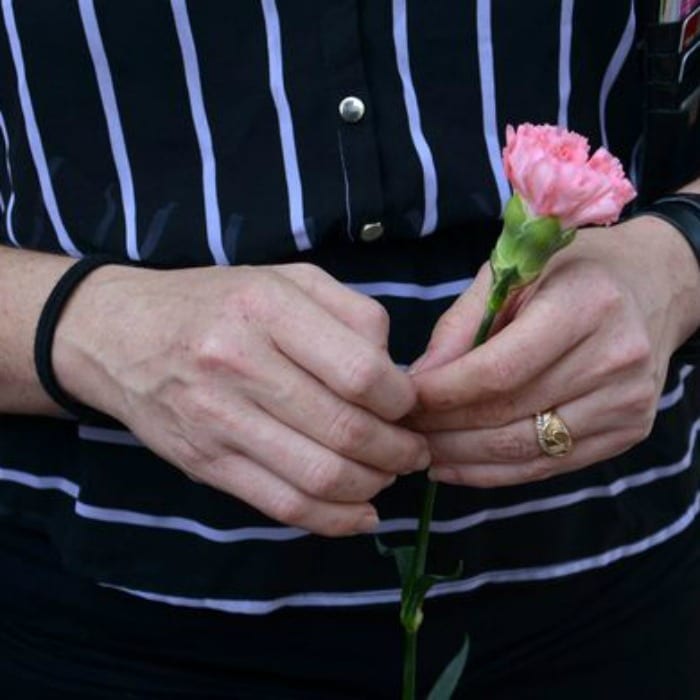