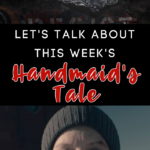 I can’t NOT talk about this week’s Handmaid’s Tale!

There WILL be spoilers — so if you haven’t seen this week’s episode, get to gettin’, because we are going to discuss this piece of small screen perfection.

If you haven’t even started the show — I don’t even know what to say to you.

Turn on HULU right now, go to The Handmaid’s Tale, and START WATCHING IT!!

We knew at the end of last week’s episode that something BIG was going to happen.

Gilead had just bombed Chicago, and June and Janine were caught in the blasts of the bombs.

As the smoke cleared, we saw June dazed, but desperately searching for Janine.

Then, coming into focus on the camera, there was — MOIRA!!

That’s how they left us — CLIFFHANGER much?!?!

This week started right where we left off — June was looking for Janine, and Moira couldn’t believe her eyes — as the smoke cleared, there was June standing right in front of her.

June was completely dazed, and didn’t even register that it was really Moira — she had one goal in her mind, and that was to find her missing friend.

Moira desperately tried to get June to a safe place, but June was too confused to even listen.

After she coerced June into going to the medical tent to get checked out — with the promise that Janine might be there — June started to realize who had found her.

Moira had to practice some “tuff love” with June, to even get her to think about getting on a boat to Canada.

From the VERY beginning, June has made it abundantly clear that she won’t leave Gilead without Hannah — and her plight in this episode was no different.

Moira’s love interest — Oona — who seemed to be in charge of the rescue mission, told Moira that she had to, basically suck it up, and leave June behind, even though it meant certain death for June.

Moira was having NONE of that — June is her “person” — so Moira managed to talk June into running for the boat, and then hiding.

You saw the episode, you know what happens from there — it was INTENSE!!

If I was a smoker, I probably would have burned through at least a half-a-pack during this episode!!

So, it’s obvious from the flashbacks in the episode, June and Moira were close — but not without their fair share of conflicts.

When push comes to shove, though, Moira and June are BFFs, and the sisterly love between them is clear.

Things sort of switched in this episode for June, who is always in control — she can act without thinking, but she does whatever it takes to get things done.

In “Vows,” it is Moira who must take the lead, and do whatever she has to do to keep her friend safe.

It is Moira who has to talk some sense into June — who appears shell shocked and a bit out of place with her emotions.

We see a vulnerability from June that we haven’t before had the chance to witness — like when Luke came onto the boat, and she just kept apologizing that she was alone.

We see that June needs help every once in a while.

While she is a rebel machine, she also has moments of weakness, where she has to be carried by her friends.

Am I the only one that kept thinking, “MOIRA!! Don’t leave her alone!!”

I just knew she was going to jump overboard, and swim back to Gilead.

But, she didn’t, and in the final moments, we saw her take a deep breath, and step onto Canadian soil.

This changes the whole entire show!!

Is she going to fight Gilead from afar with the help of the Canadians?

Is she going to escape back into captivity, and try to rescue Hannah by sheer will and force?

What about the Commander — who appears to have gone to the dark side?

I can not WAIT until next week’s episode!!

I can’t believe we only have FOUR MORE episodes left in this season.

I’m almost certainly going to have a heart attack before it’s over.