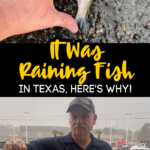 I’ve witnessed a lot of crazy stuff in my lifetime, but I have never witnessed fish raining from the sky!

Summerhill Road today right when it happened. A whole lot more too! It was definitely something I would have not believed if I didn’t see it for my own eyes!

Residents from the East Texas town reported that there were small fish falling from the sky.

Close to Texas High School. They were in the front and back yard, the street, and the neighbor’s yard.

What Caused It To Rain Fish From The Sky?

Now, this may sound like a supernatural-type event, but there is a simple explanation for it that doesn’t involve anything too crazy.

They call the phenomenon ‘Animal Rain’, it’s uncommon… but it happens when the weather conditions are right.

Animal rain is a phenomenon that occurs when small water animals like frogs, crabs, and small fish are swept up in waterspouts or drafts that occur on the surface of the earth. They are then rained down at the same time as the rain.

The fish that were raining down from the sky were small, about the size of your palm.

A waterspout most likely picked up the small fish and then dropped them back down.

What Is A Waterspout?

In this case, it was small fish that were picked up, and then as the waterspout dissipates the fish fell back down.

Some residents collected the small fish to use as fishing bait, so it wasn’t a total loss.

On The City of Texarkana, Texas Facebook page they asked residents to share photos that they captured of the fish that had rained down on the town.

The same sort of event happened in California back in 2017, it’s also happened in the town of Lajamanu, Australia at least 3 times in the past 30 years.

Updrafts Are More Powerful Than Waterspouts

Updrafts are super strong winds that are even more powerful than a waterspout!

According to National Geographic, updrafts can pick up animals that are even bigger than the small fish that rained down upon Texarkana, Texas.

I’m talking snakes, frogs, bats, and birds… could you imagine snakes raining down from the sky?

What would you do if you saw fish falling from the sky?