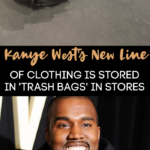 Let’s be clear, Kayne West does not want his Yeezy line of clothing thrown in the trash, even though it may currently look that way.

Kayne West’s new line of clothing, the Yeezy Gap line has Ye displaying articles of clothing in what looks like literal trash bags.

The neutral clothing piled high in ‘garbage bags’ which Kanye West explained to be construction bags, so far has received a lot of backlash on social media.

Some have even said that his presentation of the the clothing in stores looks like he’s mocking the homeless.

To explain his thought process, Kanye went on air in an interview with Fox News and said,

“Look man, I’m an innovator, and I’m not here to sit up and apologize about my ideas,” mentioned Kanye from the Times Square Gap store. “That’s exactly what the media tries to do: Make us apologize for any idea that doesn’t fall under exactly the way they want us to think, said Ye.”

“This is not a joke,” he emphasized. “This is not a game. This is not just some celebrity collaboration. This is my life, you know? I’m fighting for a position to be able to change clothing and bring the best design to the people, explained Kanye.:

Kanye also mentioned to Fox that the his goal was to try and make dressing easier and more accessible, explaining that the construction bags were so people could informally reach in and grab what they need.

Kanye West’s Yeezy Gap line has already sold out and you can watch the full interview, down below.