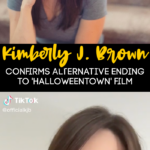 Pretty soon the classic film of Halloweentown will be on the screens of every living room TV come fall.

And if you thought you knew the movie by heart when you recite the lines every year, think again.

Thanks to TikToker @kristencaaakes’ researching skills, apparently, there was an alternative ending to the first Halloweentown film!

And guess what, the star herself, Kimberly J. Brown who played Marnie in the film stitched the TikTok and confirmed that there was alternative ending apart from what we saw on our televisions at home!

So here are all the details spilled regarding the original ending before it was changed.

As we know in the first Halloweentown movie, Marnie saves the day, (and Aggie and Gwen) by tossing the talisman in the middle of the giant jack-o’-lantern in the center of the town.

However the original writing included Marnie walking into a deep and dark forest and putting the talisman there, but there’s just one catch, with every step she would’ve took, she would grew exponentially older.

“Instead of Marnie putting the talisman in the middle of the jack-o’-lantern to save Aggie and Gwen, she had to walk deep into this dark, magical forest and put the talisman there. And as she did, with each step, she grew exponentially older, explained Kimberly in a TikTok video.”

And according to Kimberly, the writing changed in the middle of the pre-makeup process where the makeup artists had already created a cement mold of her face for the special effects makeup!

Although the special effects makeup was never finished, Kimberly did say at the end of her TikTok that she still has the cement mold which she might search for to show on social media, and we really hope she does!