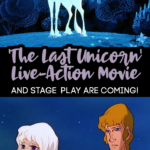 Talk about a blast from the past!

I had totally forgotten about ‘The Last Unicorn’!

I remember reading the book when I was much younger and then of course the animated movie that came out in 1982… yes I am that freaking old.

‘The Last Unicorn‘ is an amazing novel that was written by Peter S. Beagle in 1968, then later it was released as an animated movie in 1982.

The animated version was voiced by Mia Farrow, Jeff Bridges, Christopher Lee and Alan Arkin and it was a great fantasy movie.

Now, ‘The Last Unicorn’ is being remade as a live-action film and I can not wait!

Not only will it be a live-action movie, but it will also be a stage play… um yeaaaa!

Peter S. Beagle (author) also revealed that Fergie is working on the music for the two projects, but that’s basically all he has said so far.

We have no idea about release dates, cast choices, or anything else at this time, other than it is coming!

If you have never read ‘The Last Unicorn’, or watched the animated movie, it’s about a unicorn that realizes that she is the last unicorn.

All of the unicorns had been driven to the edges of the earth by the Red Bull and she is on a journey of discovery and learning what her place is in the world.

Now I have to either re-read the book or watch the animated version of ‘The Last Unicorn’ with the kids to get ready for the live-action movie.