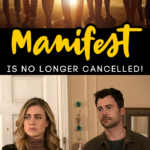 If you heard the sad news about NBC cancelling Manifest, don’t worry, Netflix has saved the day!

Manifest is now set to return for a fourth and final season exclusively on Netflix! Sure, it’s only one more season, but at least they can actually wrap things up instead of being cancelled with a TON of unanswered questions!

Netflix announced today that they will be renewing season four for twenty new episodes! And it’s all thanks to furious fans getting their voices heard!

“What started years ago as a flight of fancy deep in my imagination has evolved into the jet engine journey of a lifetime. Never in my wildest dreams could I have envisioned the worldwide outpouring of love and support for this story, its characters, and the team who work so hard to bring it all to life. That we will be able to reward the fans with the ending they deserve moves me to no end. On behalf of the cast, the crew, the writers, directors, and producers, thank you to Netflix, Warner Bros., and of course to the fans. You did this.”

“Since its premiere on Netflix in June, Manifest has proven very popular with our members. Jeff Rake and his team have crafted a beguiling mystery that has viewers around the world on the edge of their seats and believing again in second chances, and we’re thrilled that they will bring fans some closure with this final super-sized season.”

Thanks to tons of petitions online, we got our show back! How exciting!