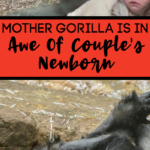 A Boston zoo-goer who has recently become a new mother has proved that a mother’s love is a universal language.

A youtube video has gone viral after Emmily Austin and a mother gorilla held up their newborn baby boys on either side of the glass for each other to see.

Emmily Austin and her husband Michael were visiting the Franklin Park Zoo when their five month old son Canyon caught the attention of a Western Lowland gorilla named Kiki.

Kiki who also happens to have a newborn baby boy gorilla of her own, the mother Gorilla couldn’t help but be in awe of the couples new baby boy Canyon.

“She kept looking around the corner of the cave, and I was like, ‘She’s looking at Canyon,’” said Emmily to TODAY.

The mother gorilla even tried to pet Canyon’s face through the glass window and also held up her hand to match Canyons, with hopes of trying to “hold his hand,” according to the new mother who said to TODAY.

For well over five minutes, Kiki stared at Canyon explained Emmily to TODAY who was in awestruck over Kiki’s reaction with her newborn.

While Canyon reportedly slept through the entire encounter while being in the spotlight, his mom hopes to return to the zoo so the two mothers can meet again, according to the New York Post.

“When I walked into the zoo that day, I never could’ve imagined that we’d have this experience,” she said in an interview with TODAY.

1 shares
You Can Get A Free COVID-19 Vaccine At Dracula's Castle If You Dare
← Previous
Starbucks Released A Teal Green Cactus Mug That'll Make Your Morning Coffee Look Sharp
Next →
Click here to cancel reply.