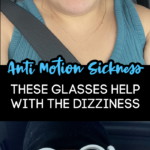 If you suffer from motion sickness, you might want to listen up.

You can now get these weird looking glasses that, when put on your face, will stop motion sickness in its tracks.

There’s nothing better than being with a group of friends — riding in a car, riding a rollercoaster, or doing something else fun — and getting motion sick.

As you probably know, motion sickness is caused by a disconnect between your brain and your eyeballs. There is confusion between what your brain perceives and your eyes actually see.

But, what if you could do something to help? It doesn’t even include pills or weird patches behind your ears.

They aren’t exactly high fashion — in fact, they kinda remind me of Willy Wonka glasses.

But, if you wear these glasses, supposedly they will help eliminate the confusion between your brain and your eyes.

In other words: No Motion Sickness.

They really do work!! I bought these for my wife because she gets very carsick. These worked so well for her, she finally was able to travel without feeling miserable.

See, these glasses don’t have lenses. Instead, they have circular tubes filled with liquid. This liquid shifts and changes with the movement of the vehicle.

The liquid creates a sort of horizon line that settles your brain.

The level of this liquid in the circle varies according to the moves of the vehicle and creates an artificial horizon in the user’s vision, which re-synchronizes the eyes with balance system.

It’s also cool, because you can put them on when you start to feel that sickening dizzy spell come on. When you are feeling better, and aren’t dizzy anymore, you can take the glasses off.

How to use: When starting [to get] motion sickness, wear this pair of glasses for 10 to 12 minutes, staring at a stationary object such as a smartphone or a book, and the motion sickness will disappear.

EVERYONE who gets that debilitating vertigo feeling that comes with motion sickness needs to try these glasses!

They are only $24! They are so inexpensive, you almost HAVE to try them.

You can get these Anti- Motion Sickness Smart Glasses on the Amazon website.