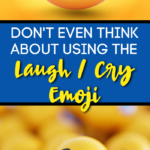 Gen Z. You’re so sweet and cute, but you’re killing me!

Lawdy Bee! (That’s a southern expression, for all you not in the know. It means, “For Goodness Sakes” or “For Crying Outloud!”)

When did I get so old?? It seems like just YESTERDAY, my generation was dictating the style and culture.

These kids / young adults are making all these wacky new “cool” rules, and not only can I not keep up, I don’t agree with MOST of them!!

In case you don’t know, Millenials were born between 1981 and 1996, and they are apparently now ancient.

It is Gen Z that is now in charge of the whole “what’s cool” and “what’s not” cultural fads that everyone adheres to.

1) Gen Z is telling us all that skinny jeans are OUT, and baggy jeans are in.

2) They are saying that only OLD people part their hair on the sides! A middle part is the only way to go.

3) AND, just so you know, the laugh/cry emoji is now HISTORY. Don’t use it unless you want to be uncool.

All this generational confrontation is coming to a head on TikTok, as all things do.

Over the last few weeks, Gen Z and Millenials have been posting battling videos on TikTok.

They disagree on what’s cool versus what’s not — and just so you know — Gen Z thinks all the rest of us are COMPLETELY out of touch.

“What’s wrong with the laughing emoji[?],” one user asked in a TikTok comment.

Another responded: “it’s so off.”

On a different (TikTok) video of a woman saying she’s cut back on using it after learning kids don’t, one teen commented: “As a 15 year old I say you should use that emoji bc [because] we sure aren’t going to.”

I use everything but the laughing emoji,” 21-year-old Walid Mohammed told CNN Business. “I stopped using it a while back because I saw older people using it, like my mom, my older siblings and just older people in general.”

I guess the cool thing to do now is to use the ? emoji. It replaces the ? emoji, and translates into “I’m dead” or “I’m dying.”

There are a few other alternatives to the ? emoji that we all know and love.

You can use the ? emoji — which means “loudly crying,” or simply use “LOL” or an equivalent.

The sideways emoji ? is also out, so don’t even think about using it — unless you are me, who will keep using it forever.

So, to sum up, don’t be caught dead in skinny jeans, part your hair in the MIDDLE, and for crying out loud, don’t ever use the ? emoji.