Today’s guest post comes from Dayton Uttinger…our newest author for Totally The Bomb…and one of the funniest ladies you’ll ever read. Enjoy!

Usually, the situation is reversed.  Usually, I am the one waking him up, opening the blinds as he lays in bed.  Usually, he is the one pulling the covers over his head, moaning in protest.

But not today. Today, he’s waking me up, opening the blinds as I lay in bed.  I am the one pulling the covers over my head, moaning in protest.  Only when I do it, it’s because the four shots I had last night bamboozled me into a fifth (or sixth), and why did ever think that this was a good idea.  I’m suddenly very conscious of fluid in my stomach, gurgling as it rolls, the balance shifting as he shakes me. 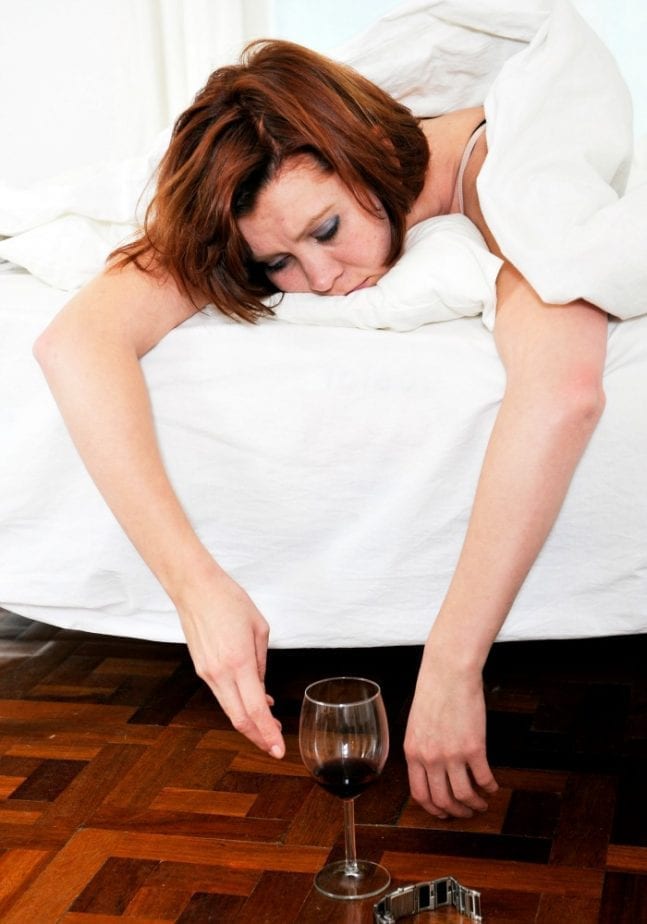 Parenting While Hungover: It Isn’t Pretty, But You’ll Survive…

“Can you make me cereal?” he asks.  The mere mention of food lurches my stomach two inches higher.

He walks out of the room.  I wonder if he can tell that I’m not 100%.  I’m sure that I look half-zombie, drool pasted on my cheek and the scent of stale booze still lingering.  Is that my breath, or has it just reached the point where I’m literally oozing alcohol from my pores?  I pray it’s the latter, because that means that I’m one step closer to being over the consequences from last night.

I carefully roll out of bed, slower than 100 year old woman with a severed spine, so as to avoid disrupting the delicate balance of acid against my remaining stomach lining.  No such luck.  I am going to vomit, I know it… Wait, no I’m okay, alright, Jordan’s still waiting for cereal.  I make it halfway down the hall before I feel it again.  Yes, I’m really going to vomit this time, I start to turn around, but it inexplicably settles again.

He turns the corner, seeing me clutching my stomach.  “Are you okay?” he asks.

Okay, now– I lurch towards the bathroom in time with my stomach.  “Go get the bowl ready,” I call, my voice strained.  I throw the lid open and brace myself on my knees.  Here we go. Yep, for reals, here it comes-

Pour your own effing cereal, kid.  I’m busy emptying my soul into the bowl.

This is parenting while hungover.  Now, you’ll notice he doesn’t refer to me as “Mommy”, but I’ve been helping raise this boy since well before I could drink.  Now in my twenties, so perhaps I don’t suffer the physical effects of a hangover as much, but it sure as hell feels like it couldn’t get any worse as I empty my entire stomach and then some into this toilet bowl.

Step One: Get the Kid to Shut Up

Okay, I’m done throwing up (for now).  Luckily, he hasn’t put it together yet that I’m hungover.  Give it a couple years, and he’ll be able to identify the signs, but for now, he’s blissfully ignorant.  In fact, he doesn’t even ask me if I’m okay again.  I pour the Apple Jacks and milk that he’ll never finish, set it on the counter, and begin chugging water to get the taste out of mouth.

He’s talking again.  Damn it.  Why couldn’t today be at school day?  Look, I know about the downsides of screen time, but I don’t think I can get through today without some silence from him.  I encourage him to sit in front of the TV, which he does eagerly, and collapse into the armchair next to him.  The repetitive, high-pitched music of his show is easy to drown out.  I close my eyes, my stomach now churning the gallon of water I drank.  I mentally prepare what I can and cannot eat today and align it with what Jordan will eat.  Luckily, it’s mostly bland, kid food, which is the only thing I can imagine swallowing right now.

Step Two: Do Your Remedy… Discreetly

Look, no one really knows how to get over a hangover.  It’s 2016, and we still got no clue.  But we know some common remedies, but some are more viable than others during parenting.  If your kid is young enough (or you’re well-prepared), you might have some Pedialyte stored…. Time to make use of that.

“Hair of the dog” is probably a no-go.  As much as I don’t want to parent while hungover, I definitely don’t want to watch a small child while drunk.  Besides, I don’t have more booze in the house.  I drank it all last night, that’s the problem in the first place.

Drinking a sports drink while you barely pull yourself off the couch to follow your kid around is not what Gatorade promotes in their commercials, but it’s exactly what the gas station attendant is envisioning when you buy it later that afternoon.  This one is pretty safe to do in front of your kid- you just want to stay hydrated! It also gives you the electrolytes and B vitamins that will give you more energy after a night drinking.

Your kid will appreciate your newfound love for greasy food.  Sorry, diet, we weren’t working out anyway- see what I did there? This is usually the one that works the best for me.  Apparently, science says that I should’ve done it the night before, but that’s not helpful now.  I DIDN’T.  Let’s move past what I could’ve done, and onto what I can do now.  Bread has a lot of carbs, which will raise my blood sugar, but as for why greasy food seems to help after the damage has already been done?  Some sort of placebo effect? No one knows, but this is my go-to.

Of course, the best cure is to pass out for a couple hours, but I can hardly do that right now.

Step Three: Get Their Shit Taken Care Of

Power through. This day will come an end.  I think.

He watches TV for a couple hours.  I nod off a couple times, but I can’t achieve real sleep.  He gets bored and wants to craft something, but can’t find the scissors.  I stumble around trying to find them for a few minutes before giving up and executing the famed fold-the-paper-really-well-and-then-tear-down-the-crease method.  He tries it, and the rip is jagged and askew.  Whatever.  I’ll find the scissors tomorrow anyways.  I tell him it doesn’t matter, and he starts taping random shapes together.

Okay, so all is well and good as long as you’ve got nothing planned that day. Painful, but bearable.  But what if you have to run errands, or he has a birthday party, or some other bullshit?  I’m not going to patronize you and say that “you should have planned for that”, because you didn’t.  That’s the point.

The goal is to minimize your involvement.  You’re not going to be world-class parent today.  If he has a soccer game, you’re sorry that you can’t stand outside in the blaring sun for two hours while watching a ball move thirty feet back and forth, but find someone else to watch it.  If she has to practice an instrument (whoa, overachiever), then make sure she does it in a carpeted, smaller room to limit the soundwaves and your headache.  If they have homework, answer any direct questions, and refer them to Yahoo! Answers.  Besides, if neither you nor your child make any progress with their assignment in 20 minutes, you have the Internet’s permission to just not do it.  I don’t know if they meant while you were hungover too, but it doesn’t not say that.
This shouldn’t be a regular thing.  Obviously. But every once in awhile, you mean to have a good time, things get a little carried away, and you forgot that you were a parent for a couple hours.   Yeah, you need to suck it up, and yeah, you need to be there for your kid, but you also need to get through the day.  Let’s save the self-evaluation and repentance for tomorrow.