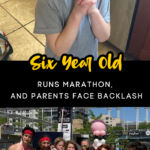 These parents are facing backlash, because they had their 6 year old — SIX YEAR OLD — run a marathon.

If you ever see me running, beware. There’s a wild animal with fangs and claws imminently closing in on me.

Thank goodness I don’t have the same parents as Rainier Crawford. I would be in a world of trouble.

According to Good Morning America, Rainier Crawford is 6 years old, and he just ran the Flying Pig Marathon in Cincinnati. Yes, all 26.2 miles of it.

I was lucky to get my 6 year old to run from one end of the playground to the other!

Rainier’s family — His parents and 5 brothers and sisters — were right there with him, running alongside him and coaxing him along the entire way.

They made it to the finish line in a grueling 8 1/2 hours. Think about it — that’s longer than most people’s work day!!

Y’all. Can you see a kid doing ANYTHING for 8 1/2 straight hours? They don’t even sleep that long in one go.

As you can probably imagine, his parents are facing a world of backlash for letting Rainier compete in the race.

26.2 Miles is tough for a normal adult, let alone a kid who is just barely out of the toddler stage.

Most marathon runners train for months. They start off with small distances, and they work their way up to 26.2 miles.

If the training sounds difficult, it is. I tried it once. It wasn’t pretty. I was lucky to make it through a local 5K, and that’s only 3.1 miles. LOL!!

Rainier, however, made it through the tough marathon training.

Some of the training was like, hard, but I falled sometimes but sometimes, when I did one, it was like, normal.

Ben Crawford, Rainier’s dad, took to Instagram to discuss the race. He said Rainier, although it was touch-and-go around the 20 mile mark, was a trooper until the very end.

He was struggling physically and wanted to take a break and sit every three minutes.

Ben had to promise him 3 sleeves of Pringles chips to get him to finish.

On the marathon course, Rainier knew they usually hand out Pringles around mile 20 — After 7 hours, we finally got to mile 20 and only to find an abandoned table and empty boxes. He was crying and we were moving slow so I told him I’d buy him two sleeves if he kept moving. I had to promise him another sleeve to get him in the family pic at the finish line. Today I paid him off.

In case you are wondering how in the world Rainier was allowed to even run in the race, the organizers of the marathon are defending their actions.

This decision was not made lightly.  The father was determined to do the race with his young child regardless.  They had done it as bandits, in prior years, before we had any knowledge of it and we knew he was likely to do so again.

The Flying Pig Marathon said that they were there to offer “protection and support” as well as medical attention and fluids.

BUT, in their open letter closing remarks, they acknowledge that maybe letting the 6 year old run wasn’t the wisest choice.

I assume full responsibility for the decision and accept that it was not the best course of action.  Our requirement of 18+ for participation in the marathon will be strictly observed moving forward.

Here’s hoping that now Rainier can just be a normal kid, and do normal kid things.

Let us know what you think below in the comments.