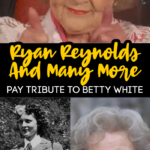 I think it’s pretty safe to say that Betty White was loved by almost everyone!

Her former colleagues and co-stars have taken to social media today to pay tribute to the late great Betty White.

Betty White died early this morning from what is said to be natural causes, she was just weeks shy of her 100th birthday.

I don’t think I’ve ever heard a bad word said about Betty White in my entire life!

Her Hollywood career was over 75 years and she is even a world record holder having the longest television career for a female entertainer!

Fans of all ages are mourning today and I see them sharing that sadness as well as celebrating Betty’s wonderful life.

Ryan Reynolds co-starred in ‘The Proposal’ with Betty White and they became great friends, often joking about their relationship.

The world looks different now. She was great at defying expectation. She managed to grow very old and somehow, not old enough. We’ll miss you, Betty. Now you know the secret.

Even the U.S. Army posted a remembrance of her service with the American Women’s Voluntary Services during World War II.

We are saddened by the passing of Betty White. Not only was she an amazing actress, she also served during WWII as a member of the American Women’s Voluntary Services. A true legend on and off the screen.

Ellen DeGeneres also took to Twitter to express her feelings.

What an exceptional life. I’m grateful for every second I got to spend with Betty White. Sending love to her family, friends and all of us.

Seth Meyers shared the best memory and it definitely doesn’t surprise me to hear this about Betty!

RIP Betty White, the only SNL host I ever saw get a standing ovation at the after party. A party at which she ordered a vodka and a hotdog and stayed til the bitter end.