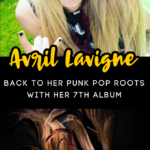 WAY back in the very early 2000s (Has it REALLY been that long?!?), Avril Lavigne was teaching us to get “Complicated” as she secured herself as the Pop Punk Princess of the decade.

Twenty years later, Avril is headed back to her Pop Punk roots, and is about to release her SEVENTH studio album.

The album has yet to be named, but Avril says it’s a “love letter to women.” And, wait for this — it’s inspired by Green Day!! Gah!!

This is going to be an EPIC return!!

There also isn’t an exact drop date at the moment, but Avril assures us that it will be “at the top of the year” — so sometime around now.

This time, she’s a little bit older, a little bit wiser, she’s “in such a good place,” and doing things HER way — and we are here for it!!

I mean, we have all grown up as our favorite Pop Punk Princess was finding herself, and now we are ready for her to release something AMAZING!!

We’re all having so much fun. I really went back to what sounds I originally was influenced by at the beginning of my career. To the core, I’m a kid from a small town who listened to bands like Blink-182 and Green Day and NOFX in high school, and I tapped into that. But I also was writing power ballads like “I’m With You” and stuff like that [when I first started out], so this time I just wanted to have fun and rock out. It just felt like it was time to make this type of an album.

This time — unlike all her other albums — she doesn’t have a big record label involved. She just went into the studio without a plan, and hashed out a bunch of songs. It really doesn’t hurt that she was collaborating with — one of my faves — Travis Barker.

She wasn’t all worried about what’s popular on the radio now or what someone thinks people want to hear. She wanted to make a Pop Punk album, so she did.

I was just like, “F— this.” Back to live drums, electric distorted guitars. It’s fast. It’s fun. It’s just pure rock & roll from front to back. — A lot of these songs are about having the strength to walk away if someone doesn’t see [that you are knowing who you are and trusting who you are]. I wanted to make sure I wrote music that people could relate to. It’s about valuing yourself and knowing you’re enough. It’s really a love letter to women.

She says this is definitely a more ‘alternative’ album than she has previously released, “front to back.”

I can’t tell you how happy this makes me. She is really taking it back to a time and type of music that speaks to so many!

It’s really cool to see it become more popular right now. Pop-punk feels more popular than it’s ever been, in a way. it’s kind of like a soundtrack to our youth. These days there’s so many cool, different collaborations, and it bridges the gap between then and now.

You might have noticed, back in November, Avril quietly dropped her first single off the album, “Bite Me.” (You can catch it HERE.*) It is an AWESOME first look at what’s to come on this album!

Of course, you can catch Travis Barker on the drums!!

Is anyone else jealous that Avril hasn’t seemed to age one bit?!?

I’m feeling really good. It’s nice to be at this point in my life, still making music, and I’m here today not because I have to but because I want to be. I just fall in love with music over and over. I’m really happy and feeling great and really looking forward to starting this new era.

Be looking for Avril’s album to drop sometime very soon.

* Beware of the level 10 cursies for the kiddos