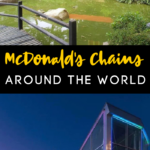 Mmm, the smell of french fries from the highway with the sight of the sky-high golden arches tempting you to take the next exit to sit in the drive-thru line of the very popular McDonald’s fast food restaurant.

When we think of McDonald’s it’s common to think of the big yellow ‘M’ and thanks to a recent collection of images that went viral on Facebook, the United States fast food chain needs a makeover!

Who knew that McDonald’s chains around the world would look so different than the restaurants we pass nearly every time we leave the house here in the U.S.

Take this McDonald’s location for example.

This chain is shaped like the exact happy meal we used to get as kids, except incredibly larger and with the exception of more color and pictures!

One of the other McDonald’s restaurants looks like it was built by NASA, while another image of the fast food location is literally built like a castle.

In fact does the Queen eat here?

A dome shaped McDonald’s also exists and another chain looks like a smaller version of the White House.

After seeing the collection of photos on social media, the United State’s McDonald’s needs remodeling starting with the outside of each chain!