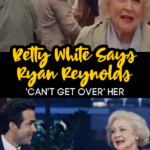 Betty White is freaking hilarious, and she hasn’t lost a bit of her personality as she quickly approaches her 100th birthday!

Ryan Reynolds and Betty have a great relationship with a fun back and forth about how they feel about each other and their ‘relationship’.

Betty had played his grandmother in ‘The Proposal’ back in 2009 and they have been great friends ever since.

Back in 2019, Ryan posted about his love for Betty on her 97th birthday.

I don’t usually post about ex-girlfriends. But Betty’s special. Happy Birthday to the one and only, @bettymwhite.

Recently Betty White had an interview with People and she said…

I’ve heard Ryan can’t get over his thing for me, but Robert Redford is The One.

After the article was published, Ryan Reynolds took to social media to “bash” the media in a jokingly way…

I’m absolutely sick of the media exploiting past relationships just to drive clicks.

This back and forth banter between the two is absolutely adorable and hilarious!

Ryan says he has been a fan of Betty’s for as long as he can remember.

He also said that Betty is a typical Capricorn that sleeps all day and is out all night boozing and snacking on men, I think Ryan might be a little jealous!