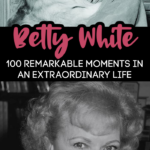 Author Ray Richmond went on a deep dive into the actress’s life to come up with 100 remarkable moments in her life.

He was worried that everything had already been covered since Betty had penned 3 memoirs herself and she has an obsessive fan base that pretty much knows everything about the star.

Once he jumped in he realized that there was soooo much more to Betty and was hooked.

100 Remarkable Moments in an Extraordinary Life

The new book is called ‘Betty White: 100 Remarkable Moments in an Extraordinary Life’ and it has already been released just ahead of her 100th birthday.

One reason she’s achieved all that she has is that once a performer hits a certain age, you become iconic and loved simply because you’re still there.

The book covers moments throughout Betty’s life starting with her birth into this world on Jan. 17, 1922.

Betty’s parents, Tess and Horace White lived in Oak Park, Illinois when she was born, and not too long after that, they moved to Alhambra, a suburb of Los Angeles.

What people love about Betty is how game she is for everything apple pie and America — and in the same breath she can swear like a sailor.

Although Betty didn’t participate in the creation of this book with Ray Richmond, he had plenty of people that know the star well working with him.

Unlike so many stars, the deeper you look, the more you find dirt on them. They really aren’t quite the image they project. The further you dig into Betty White, the greater she gets. It’s uncanny.

Ray was able to learn a lot about Betty from people such as Carol Burnett, Ed Asner, Wendie Malick, Candice Bergen, and producer Ed. Weinberger.

You can pick up a copy of the new book ‘Betty White: 100 Remarkable Moments in an Extraordinary Life’ on Amazon for yourself or as a gift.