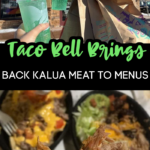 Taco Bell currently has several options to choose from when picking the meat that goes into your taco.

Prefer beef over chicken; juicy steak stripes or the vegan version of your wrapped burrito, the fast food chain is adding yet another meat to menus to pack in your meal or sprinkle over your nachos.

Introducing the return of Kalua Pork, shredded meat that has officially made its return to Taco Bell according to a Reddit post.

Welcomed to Taco Bell menus since 2008, Kalua Pork is one of Taco Bell’s limited time options that doesn’t make a return often, but when it does it’s addicting with every release.

Add to a crunchy taco and don’t forget the lettuce, shredded cheese, and chopped tomatoes or add as a protein to your nachos, and while I might have your mouth watering, here’s the heartbreaking news.

While the meat is sourced from a local provider in Hawaii, the chain has yet to make this meat nationwide which means yes, it’s only available to order in the state of Hawaii.

However, if you are lucky enough to be a resident in Hawaii or taking a vacation to the tropical island, you can indeed get your hands on this meat!

Reinvent your favorite menu items with the return of the Kalua pork!