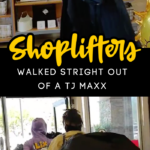 Well. I’m not even sure what to say about this.

Whatever happened to common decency and moral standards?

2 Men in a suburb of Los Angeles were seen (by multiple people) and caught on camera casually walking out of a TJ Maxx store with their arms full of stolen merchandise, and nobody did a thing to stop them.

They didn’t even run out, they walked out.

One of the men just had arms FULL of clothing, and the other man even had a duffle bag that was full of stolen merchandise.

The robbers didn’t even care. They just casually picked up the merch, and walked right out the door.

Why didn’t anyone run to stop them?

There have been several instances lately where store workers have been shot and killed for trying to stop robbers from stealing merchandise.

TJ Maxx employees have been told NOT to stop would-be shoplifters, because the stores are insured against theft, and they would rather lose merchandise than to lose the life of one of their employees.

See, California just enacted Prop 47, which lowers the criminal sentencing for non-violent crimes — like shoplifting. As long as the thieves don’t go in brandishing a gun or other weapon, it is considered a non-violent crime, and they will get little more than a slap on the wrist.

If they’re caught, they’re probably given the equivalent of a traffic ticket. So it’s not taken seriously.

So, if the thieves know that nothing is going to happen to them, and nobody is going to stop them, they will just walk in, take merch, and walk right back out.

And, that is EXACTLY what happened at TJ Maxx.

It’s not like they were stealing milk, formula, and food for their kids — which is wrong, but I can at least understand. They were just flat-out stealing because they could.

If you let these criminals think that they can go in and steal merchandise and steal things, what happens when someone tries to stop them? — it’s not taken seriously.

Though LAPD is investigating the crime, no arrests or citations have been made.

I mean, they straight-up know who did it. IS anything even going to be done about the case?

Once officers make an arrest or cite someone for a crime, they will present the case to our office. We make charging decisions accordingly. We do so based on the facts, the totality of the circumstances, and the law.

I’m just going to be over here wondering exactly where we went wrong as a society. When, exactly, we became a generation that didn’t produce decent and upstanding individuals.

To see the entire Instagram video of the thieves walking out the door with the TJ Maxx merch, you can go HERE.