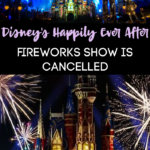 The mouse has recently made a big decision and the news comes as a shock to many.

Disney announces that they will be permanently removing the “Happily Ever After” fireworks show exploding from Cinderella’s castle.

Considering the show has just returned and will most likely be splitting hearts nationwide, we’re only hoping Mickey has at least run his idea across to Minnie.

With the removal of the fireworks show that gives Disney fans goosebumps while momentarily making everyone who watches feel like a kid again, will be replaced with another nighttime show beginning on the first day of spooky season.

“A new nighttime spectacular, “Disney Enchantment,” will help kick off the 50th anniversary festivities when it debuts Oct. 1 at Magic Kingdom Park. Created to launch with “The World’s Most Magical Celebration,” this evening extravaganza will take you on a journey filled with adventure, wonder and empowerment. Inspiring everyone to believe in magic, “Disney Enchantment” will feature music, enhanced lighting, stunning fireworks and, for the first time, immersive projection effects that extend from Cinderella Castle down Main Street, U.S.A, said Disney Parks Blog.”

The last Happily Ever After fireworks show exploding from Cinderella’s room will take place this year on September 29th, which means if you have yet to experience the array of colors, the month of September is your very last chance to do so!