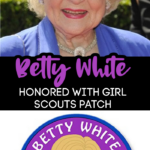 On December 20th, the Girl Scouts announced a commemorative patch called ‘A Wonderful Tribute’ in honor of Betty White.

After the announcement, it had about 712 registrations, but then since Betty passed it has grown in demand.

We are truly saddened at Betty White’s passing, but the incredible response to the patch program is a wonderful tribute to her impact on women.

The patch is to pay tribute to the life and legacy of Betty White and is part of the Girl Scouts Amazing Woman of the Month series.

She is a strong role model for girls — a feminist, civil rights supporter, animal activist, brilliant actress, and overall nice human being.

The series was started in October 2021 by Stacy Petti to introduce inspiring woman leaders to Girl Scouts members.

They have offered patches honoring the following women so far:

And now for January, Betty White!

Girls Scouts Can Earn The Patch By Being More Like Betty!

Girl Scouts will participate in a program with activities they must complete to earn the custom patches.

To earn the Betty White patch, they will need to build a pretend television, create a game show, learn how to get along with other people, and of course… advocate for animals!

There will be a live zoom introduction to the program held on January 12th from 7 pm – 7:30 pm Eastern time, if you sign up afterward you can still participate.

Registration is open now and you can sign up for just $10!