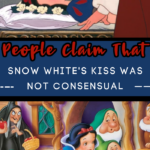 After shutting down for more than a year, Disneyland in California has finally reopened after tears of joy were seen rolling down many Disney fans who entered the park for the first time, in a long time.

After being open for less than a week, a new ride has stirred a controversial concern.

It looks like the wicked queen in Snow White is not the only character stirring the pot, some individuals are angry with the revamped Snow White ride in Disneyland, California.

Previously Snow White’s Scary Adventures, the ride’s new purpose is to show the happily ever after ending that is promoted in the original film.

In Disneyland’s updated Snow White’s Enchanted Wish ride, critics of the new ride are claiming that the true love’s kiss shown during the ride is not consensual because the Disney princess is asleep.

“A kiss he gives to her without her consent, while she’s asleep, which cannot possibly be true love if only one person knows it’s happening,’ noted reviewers for SFGate.”

In the film, the true love’s kiss happens when the prince believes Snow White to be dead, then kissing her and breaking the evil Queen’s curse that originally put her in a deep sleep.

“Haven’t we already agreed that consent in early Disney movies is a major issue? That teaching kids that kissing, when it hasn’t been established if both parties are willing to engage, is not OK?” the critics wrote.

“It’s hard to understand why the Disneyland of 2021 would choose to add a scene with such old fashioned ideas of what a man is allowed to do to a woman, especially given the company’s current emphasis on removing problematic scenes from rides like Jungle Cruise and Splash Mountain,” the review continued.

Is Disney’s Snow White film the next to be cancelled?

Say goodbye to cpr and every other life saving anything if you are unconscious.

Believing she is dead, pretty tough to get consent. So everyone that kisses a family member or friend who has died or unconscious, is equally as guilty.

WTH ??? as long as everyone keeps giving in ,it will never stop .So many liberals with too much time on their minds . need to stop the stim payments & get them to work !

This is absolutely ridiculous. Anyone would want to wplace.ake up from the curse of the evil witch. If the prince has to kiss her do that it is implied consent. The part everyone should be offended about if anything is the evil witch and her jealousy that caused her to believe she was allowed to poison Snow White in the first place.