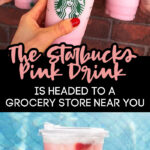 Part of the Starbucks Secret Menu, that actually officially made it onto their menu a few years ago, has now made it to the big time.

The Pink Drink — that cult favorite that includes coconut milk with Strawberry Açaí Refresher — is headed to a grocery store near you, and my addiction is about to go mainstream.

I can’t say no to that delicious Pink Drink.

I could literally kiss whomever came up with the recipe — and ask them for money, because I spend half my paycheck on the drink each week.

Now, you can already get several ready-made Starbucks coffee-based beverages in the grocery store, including Iced Coffee and Bottled Frappuccino.

But, you are about to be able to hop into your local grocery store to get that tasty milky-pink beverage.

This marks the first time that Starbucks is going to offer up something other than coffee in grocery stores, and I say it really is time.

They sell SO MANY those Pink Drinks inside Starbucks locations, it only makes sense that they also move the drinks into grocery stores.

Starbucks has not officially announced exactly when the Pink Drink rollout to grocery stores is going to commence.

The Takeout, however, was able to talk to a rep who dropped the news that the Pink Drink will be coming to grocery stores “soon.”

Be keeping your ears perked up and your eyes peeled, because it will be slipping into stores before you know it!

p.s. If someone wants to drop Santa a hint, I could use some bottled Pink Drinks in my stocking this holiday season!