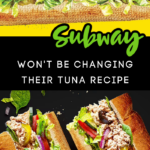 Subway has been splashed all over the news lately, what with their Tuna Fiasco, their alleged Fake Bread, and the news that they are bringing us New and Fresh Ingredients.

But, those fresh new ingredients WON’T include changing their tuna recipe, and they are backing up this decision with a reason.

According to CNN, who sat down with Subway CEO John Chidsey, the Tuna Sandwich Lawsuit was amended to say that the sandwich is “not made 100% with tuna because it doesn’t always use skipjack or yellowfin tuna.”

Chidsey explained that the sandwich IS considered 100% tuna, but the only thing in question is what KIND of tuna the restaurant uses.

He points out that there is no longer even a question about IF their sandwich is tuna, because it is. In fact, Subway says they use “wild-caught skipjack tuna regulated by the Food and Drug Administration (FDA).”

If you follow the science, once tuna is cooked, its DNA becomes denatured, which means when you go to test it, you can’t tell one way or the other.

They are so sure about their tuna recipe, that it is the ONE thing in their store that isn’t changing during their massive refresh that they have been working on for over 15 months.

There has been so much debate about Subway’s tuna recipe that the fast-food chain developed a website to “clarify all these misconceptions.”

You will find all kinds of facts about the science and the process that goes into making the tuna for the Subway Tuna Sandwiches.

Subway is so confident in their tuna recipe that John Chidsey even says it is one of two favorite sandwiches he has at the restaurant.

If you want to check out all the science and facts around the Subway Tuna Sandwich you can go to SubwayTunaFacts.com.

Chidsey leaves us with these words: “We’re very proud of our tuna, so I think that’s really the end of the story.”

2 shares
Johnson & Johnson Has Recalled Sunscreens Including Neutrogena and Aveeno
← Previous
You Can Get Girl Scouts Cookies Flavored Coffee And I Am Obsessed
Next →
Click here to cancel reply.