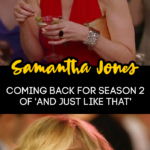 So, is Kim Cattrall backtracking on showing up for And Just Like That?

The technical answer to that would be — NO. But, hold up before you quit reading.

Kim Cattrall isn’t exactly showing up for filming. In fact, she won’t physically be anywhere near the set.

In fact, we can probably leave Kim out of this altogether.

Let’s just say that Samantha Jones is returning, and going to be a part of the show — kind of.

It’s almost impossible to talk about anything related to Sex and the City without including ALL of the OG cast.

Carrie Bradshaw, Charlotte, Miranda, and Samantha. They ARE the show that was Sex and the City.

There is, of course, drama drama drama over the fact that Kim Cattrall didn’t come back for the reboot show which airs on HBO Max.

It started when Kim didn’t want to make another Sex and the City movie, and I guess the tift bled over into the new show.

Will Samantha Jones Appear In Season 2 Of ‘And Just Like That?’

According to Variety, the showrunner for And Just Like That, Michael Patrick King, confirmed that Samantha will be in the show — through text messages.

Not really. In the world of And Just Like That Samantha is off doing her own thing. It makes sense that there would be text exchanges between the characters.

I mean, real people communicate through text messages all the time, right? Heck, I probably wouldn’t have very many friends if it weren’t for texting.

In the 1st season of And Just Like That we learned that there was some strife between the characters. That’s the excuse they gave for Samantha not appearing in the show.

As the season went on, part of the storyline was that Carrie and Samantha were making up via text messages.

Carrie and Samantha even agreed to meet for cocktails after Carrie dumps Big’s ashes in the finale.

We didn’t get to be a part of that reunion, but it totally happened in the world that is And Just Like That.

It’s very funny, because every single one of the writers has a different version of what happened during that conversation.

So, at least Samantha is kind of back. In the world of And Just Like That, everything is turning out great.