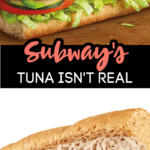 I feel like Subway keeps ending up in the news for all the wrong reasons.

Recently, I read an article about how Subway’s bread couldn’t even be classified as bread because of the amount of sugar in it. But now, tuna is the item under the microscope.

According to Subway, their tuna is 100% real wild-caught fish. But thanks to a study done by The New York Times, we can definitely say liar liar, pants on fire.

They spent over $500 in tests, purchased the tuna sandwich from multiple locations, even some premade frozen premade products, and found…nothing. Literally no fish.

“No amplifiable tuna DNA was present in the sample,” the lab report concluded, “and so we obtained no amplification products from the DNA.”

How are all of these food chains able to pass their food as “100%” when it’s actually 0%!?! How is that even allowed? And how has Subway gotten away with it so many times?

I don’t know about you, but I’m starting to have a lot of trust issues. Something’s fishy about this whole situation…