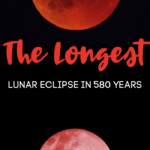 The full Beaver Moon which will be just shy of a total lunar eclipse, 98% of the moon will be covered by the Earth’s shadow, according to the The Old Farmer’s Almanac.

Remaining for about three and a half hours long, the lunar eclipse will stretch from 2:18 to 5:47 a.m. EST while the Beaver Moon will peak at 4:02 a.m. EST and will be visible across North America, NASA reports.

The history making lunar eclipse that coincides with the full Beaver Moon will reach peak illumination at almost the same moment as one another, according to the The Old Farmer’s Almanac.

A lunar eclipse occurs when the moon moves into the Earth’s shadow and blocks the sun’s light, causing the moon to turn a dark red color which means this full moon will also have a reddish, coppery hue.

Unlike solar eclipses, lunar eclipses are safe to view with the naked eye and since this is the longest lunar eclipse in nearly 600 years according to Butler University’s Holcomb Observatory, set your alarms early on Friday morning because you know what they say, the early bird really does catch the worm.