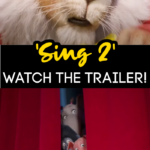 Y’all, I am so excited about ‘Sing 2’, the original ‘Sing’ is one of our favorite movies to watch over and over again!

This coming holiday season we are in for a treat with the release of ‘Sing 2’!

It is filled with big dreams and amazing hit songs with the ever-optimistic koala, Buster Moon, and his all-star cast of performers prepare to launch their most dazzling stage extravaganza!

It all take place in the entertainment capital of the world, and there’s just one issue…

They first have to persuade the world’s most reclusive rock star (played by global music icon Bono, in his animated film debut) to join them!

Buster, voiced by one of my favorites, Matthew McConaughey has taken the ‘New Moon Theater’ and turned it into a local hit!

He does have his eyes on the bigger prize though, which is to debut a show at the ‘Crystal Tower Theater’ in Redshore City.

The thing is, Buster just doesn’t have the connections that he needs to make it happen.

So he takes his cast, which includes:

And they sneak their way into the world-famous Crystal Entertainment offices which are run by Jimmy Crystal a ruthless mogul wolf(Bobby Cannavale).

So Gunter pitches a completely outrageous idea that Buster runs with and promises Mr. Crystal a new show with a rock legend named Clay Calloway (Bono).

The thing is, Buster doesn’t even know Clay… and Clay has shut himself away from the world over a decade ago after his wife died.

Mr. Crystal is a legit gangster that you don’t want to mess with and Buster is challenged to find Clay and try to get him to return to the stage again.

Watch the trailer for ‘Sing 2’ below and then watch the movie in theaters on December 22nd, 2021!