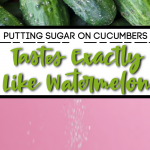 Cucumbers and cream cheese is an excellent combination for a midnight snack or even after a workout, but if you’ve recently being scrolling through food TikTok, topping cream cheese on cucumbers is yesterday’s news.

Videos surfacing on the popular social media platform have gone viral all due to one woman who was brave enough to sprinkle a pinch of sugar over a slice of cucumber.

We know that this combination sounds absolutely crazy, but if there’s anything we’ve learned in the past year is that crazy can sometimes be a good thing.

So what happens when you put sugar on a cucumber?

Does it a grow another cucumber, does it shrivel up? No, but it does taste like a slice of watermelon and yes, you read that correctly.

Putting sugar on a cucumber tastes exactly like a watermelon and the proof is the in the pudding, or in the cucumber in this case.

TikTokers’s minds have been blown and just by the expressions on their faces is enough proof to know that you can turn a cucumber into a slice of watermelon with one ingredient!

So when you’re walking past your kitchen for the tenth time in the past hour looking for a snack to satisfy your hunger, try cucumbers with sugar if you have a hankering for watermelon!