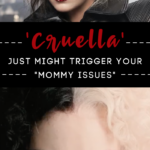 While “mommy issues” is a term that seems to be reserved for mother and son relationship, Cruella has some serious mommy issues that will trigger the crap out of you if you let it.

This post WILL contain spoilers, so if you haven’t yet watched Cruella, go straight to Disney+, drop the 30 bucks for Premier Access, and watch the movie — it is brilliant!

I mean, you watch as little Estella witnesses her mom fall off a balcony to her death on the rocks below.

Leave it to Disney to kill off the mom — Bambi, Cinderella, Tarzan, Dumbo — shall I name more?

Little Estella was always a spirited child — some might call it a tad psycho — having 2 personalities that manifest in different situations — Estella and Cruella.

Her mother always tried to “Love” Estella / Cruella into shape — telling her to tone it down and to fit in.

But, it is the death of her mother that breaks Estella, and ultimately leads Cruella to take control.

When her mother plunged to her death, it broke Estella / Cruella.

Estella now had to try to break free from the trauma of her mother’s death, make it in the world on her own, meet Horace and Jasper in the process, and learn to be on the wrong side of the law to survive.

When she met the Baroness, and found out it was really the Baroness who had killed her mother, all the gloves came off, and ‘Cruella’ came out to play.

THEN, there is the moment we learn the TRUTH about Estella / Cruella’s past — and we learn that her mother truly was a narcissistic psycho who abandoned her to die at birth.

As if she didn’t have enough mommy issues, right?!?

Now she had to deal with the fact that she is the blood heir to one of the most hideous people to walk the streets of London.

She learned that she was BORN into a situation that enabled ‘Cruella’ to come out in full force.

Her NEW mommy issues bring out the fierce and brilliant ‘Cruella,’ who is now bent on exacting revenge against the one who caused it all.

People do need a villain to believe in, so I’m happy to fit the bill.

If you are one of these people suffering from a strained maternal relationship, be prepared to be triggered beyond belief!

Cruella hits on all the dark themes — death, grief, trauma, anger, revenge, and even abandonment — and it does so in a very dark and angry way.

I’m not saying avoid the movie — it is too good to miss — just know going into it that you might get lost in your feels.

The film may bring out some things you would rather forget and keep in the past.

All that being said, I can’t WAIT for the sequel!!

We already understand her love / hate relationship with dalmatians, and we have been introduced to Pongo and Perdita, so bring on the second half, where we meet the 101 dalmatians!