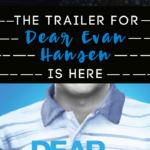 The trailer for Dear Evan Hansen is here, and WOW — grab your tissues, now!

It is a Tony-Award-Winning book and broadway musical — which is all fine and dandy — but it’s now a movie.

It’s a film that hits entirely too close to home for so many, and even the trailer gives me all the feels.

The generation-defining Broadway phenomenon becomes a soaring cinematic event as Ben Platt reprises his role as a high schooler aching for belonging in the social-media age.

It’s tough being the parent of a teenager — and it’s perhaps even tougher to actually BE a teenager.

They go through SO much in life — from joys, to what feels like rock bottoms, from isolation and loneliness to friends and contentment.

There is just so much LIFE that gets in the way of living, and that “life” is sometimes just a big punch in the gut.

That is sort of what Dear Evan Hansen is about.

There is nothing that teenagers — or all of us, really — want more than to just fit in and be accepted.

It is especially hard during this age of social media — where people can just sit behind their computer screens and get lost in the world of aloneness.

And, we all know that social media — while it can be fun, entertaining, and helpful — can also be a world of hate and hurt.

In Dear Evan Hansen, Ben Platt plays Evan Hansen, who is a teen that suffers from social anxiety and isolation — I can relate.

He goes to a therapist, who recommends he write letters to himself about the good things that happen in his day — hence the name Dear Evan Hansen.

At school, Evan struggles to fit in and be normal.

But, as sometimes happens, Connor — a kid at school who also suffers from loneliness — mistakes Evan’s shy awkwardness as insults.

Connor — who obviously has that teenage self esteem issue — thinks Evan is trying to make fun of him, which is about as far from the truth as possible.

He even finds one of Evans “letters” on a printer, and thinks it’s Evan’s way of embarrassing him in front of everyone.

But, when Connor is found, he has the letter in his pocket that Evan left on the printer.

Because he is embarrassed about the letter, Evan tells everyone that he and Connor were best friends — even though they barely knew each other.

Everyone assumes the letter that was in Connors pocket was a “suicide note,” but it was actually a letter written by Evan and FOR Evan alone.

People start reading into the note — wondering what Connor meant by “his” last words on the page.

So much more happens after this, but you will just have to watch to see what happens.

It is SO good.

Have your tissue with you, you will need it.