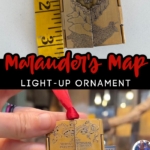 If I could have a complete Harry Potter themed Christmas tree, I TOTALLY would!

Universal Studios just released a new and TOTALLY AMAZING Marauder’s Map Ornament, and I have to get one!

On the outside, it looks like the normal map, but it opens up to reveal the full map with light-up footprints!

How cool is that? Each set of footprints light up one at a time to appear to be walking just like the map does in the book/show!

If you can somehow make it to Universal Studios, these are $22. But for those of us less lucky, you’ll have to pay about double on Mercari to snag one!