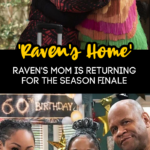 They say all good things come back around, and this That’s So Raven character is one of the good ones.

T’Keyah Crystal Keymáh, who played Raven mom in That’s So Raven, has signed on to return to the world of Raven.

As you probably know by now, Raven has returned to The Disney Channel in the series Ravens Home — which is about to finish up its 5th season.

In this series, Raven is a single mom of twins.

Raven’s mom, Tanya Baxter, who we haven’t seen since the 3rd season of That’s So Raven, has been in London getting her lawyer-ness on.

If you remember, she left Raven to pursue a law degree. Now, she has it, and she still lives in london.

Tanya Baxter is still in England — She is getting her full life as a lawyer and she sends money home, so thanks, Mom. How do you think we have this big house in San Francisco? Off a restaurant? I don’t think so!

In the pretend world of Raven, her mom sends money home to help out. That’s how they have that big house in Raven’s Home *Wink Wink*

Tanya Baxter is going to fly in for a special surprise appearance at Victor’s 60th birthday party.

We probably won’t see her as a permanent fixture on the show, but it’s still cool that she’s making an appearance.

In real life, Raven-Symoné and T’Keyah are still in touch, and that makes my heart happy.

T’Keyah and I still have a lovely relationship — We talk enough to know that we’re still in each other’s lives.

You can see Raven’s mom in the special Raven’s Home finale episode which airs later this year on the Disney Channel.